Why Are My Prayers Delayed? 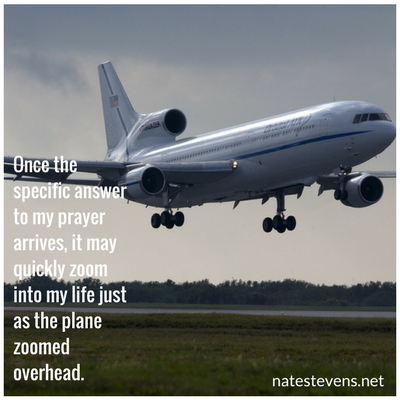 At the beginning of your supplications (prayers) the command went out, and I have come to tell you…from the first day that you set your heart to understand, and to humble yourself before your God, your words were heard; and I have come because of your words. But the prince of the kingdom of Persia withstood me twenty-one days; and behold, Michael, one of the chief princes, came to help me. (Daniel 9:23; 10:12-13, parenthesis added)

I love watching planes take off and land. There is just something about the effortlessness with which they rumble down the runway on takeoff, noses pointed to the sky as they gently kiss the earth goodbye. Then when landing, they align with the runway and glide smoothly back to the earth’s embrace. It all seems so magically impossible.

I recently watched a large passenger plane approach for its landing. From my perspective, it was distant and seemed to take forever to arrive. However, the closer it got, it seemed to pick up speed. When it was overhead, it zoomed past toward its planned rendezvous at the airport. What previously appeared as a small, slow-moving object on the horizon was in fact large and moving fast. It just had a lot of ground to cover to reach its destination. Since I was in its flight path, my perception aligned with reality the closer the plane got to me.

It served as a truthful reminder regarding my prayer requests and expectations. Things I ask of God, promises I expect to be fulfilled, may seem to take forever. However, I often overlook God’s sovereign coordination of all the details behind the scenes as He fulfills His plan according to His timing. From His perspective and timeline, the “approach and landing” are always right on time. As it approaches, I may notice things speeding up. Once the specific answer to my prayer arrives, it may quickly zoom into my life just as the plane zoomed overhead.

There can be many reasons for delayed or seemingly unanswered prayers. We may ask for something that isn’t God’s will. Often, we pray with selfish motives. Sometimes we ask “amiss, that you may spend it on your pleasures” (James 4:3). Yes, even though “The effective, fervent prayer of a righteous man avails much” (James 5:16), we have all experienced what we believe to be delays.

Two inspiring Bible characters confirm that God does indeed hear our prayers. But His answers may be seemingly “delayed” by His timing (Joseph) as well as by spiritual warfare (Daniel).

Potiphar’s wife falsely accused Joseph so her husband wrongfully imprisoned him. I suspect Joseph waited anxiously for God’s vindication and deliverance. After all, he had done nothing wrong. Matter of fact, he did everything right. Yet he still wound up with the rest of the convicts. But his faith in God sustained him. He adjusted, proved himself faithful in his assigned tasks, and was soon promoted to co-warden. In this role, he met two fellow prisoners — Pharaoh’s cup-bearer and baker.

Since Joseph knew the cup-bearer would soon be in Pharaoh’s presence, he asked him to explain his false imprisonment and ask for his release. But it would be another two years before God coordinated all the details to grant his request. Like the plane that seemingly took forever to arrive, those long days and months in prison must have seemed like an eternity.

But God had not forgotten or abandoned Joseph. He was simply orchestrating the many details behind the scene to fulfill His ultimate plan in His timing. He planned the drought that would destroy the crops in the surrounding countries. Then, He arranged the economic downturn that forced the people of the surrounding countries to go to Egypt for food and supplies. Finally, He waited until the right time to give Pharaoh his startling dream that catapulted Joseph from prison into his role as savior of Egypt. Although it took much longer than expected, when Joseph’s answer finally arrived, it came in a hurry.

Turning our attention to Daniel, we find he prayed fervently on several occasions. Each time, God let him know He heard Daniel’s prayers when he spoke them. But the answer was still a small dot on the horizon of Daniel’s faith. One time in particular, a battle in the spiritual realm delayed the answer. The angelic messenger who was dispatched with Daniel’s answer was engaged in spiritual warfare for 21 days. But once that battle was over, he hurried to deliver his news. Through that three-week delay, Daniel never gave up or lost hope. He stayed faithful to his prayer life and prayed until the answer finally broke through.

In both instances, these men remained faithful to their duties, to their faith in God, and to His sovereign control. Through eyes of faith, they saw the answer to their prayers even when seemingly delayed. Just as I saw the plane from far off, it seemed frozen in time. But as it got closer, it seemed to pick up speed as it raced to its destination. Even when it seemed a long way off, even when it seemed “stuck” where it was, it was still flying according to schedule.

It’s easy to know God can answer prayer. Yes, it’s easy to understand He has His own sovereign timeline. Furthermore, it’s easy to accept He does all things well and according to His purpose. The difficulty comes in patiently believing He has my best interests at heart and waiting for the answer at the right time.

My friend, if the answer to your prayers seem to take forever to arrive, keep trusting God. Hold on, the answer is on its way. Think of it as a plane approaching the runway toward its scheduled arrival. Then prepare yourself. It may arrive quicker than expected!