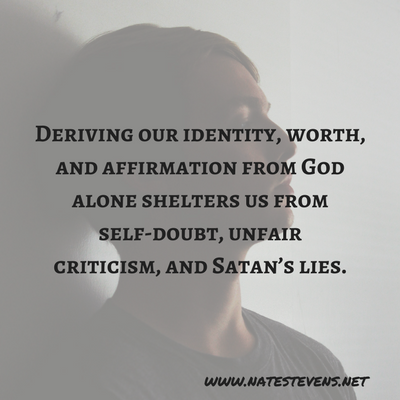 I recently read a fascinating book titled You Can Read Anyone by David J. Lieberman (Copyright 2007, MJF Books). It divulges some of the tactics used by government profilers to determine behaviors and mindsets of people they interrogate. As we might presume, a person’s self-esteem plays a critical role in how he or she thinks, behaves, and makes decisions.

“It is easy to do the right thing and maintain good values and moral beliefs when there’s no self-interest. The only force holding self-interest in check (when it conflicts with what is right) is self-esteem; and self-esteem is what holds healthy values and beliefs in check.”

The premise being, high self-esteem helps a person hold to his values and moral beliefs while low self-esteem encourages him to question and possibly abandon them. In the absence of the Holy Spirit, I am inclined to agree. However, for a Christian, this should not be the reality.

Base Your Worth on God’s Value

A Christian accepts his value from God and is not swayed by cultural pressure. God’s Word dictates who he is, how he should act, how he should dress, and what he should do. If he remains confident in God’s valuation, his self-esteem remains high. However, if Satan can influence him to question his value, accept cultural overtones, and feel poorly about himself, his values and beliefs become vulnerable. As his self-esteem drops, his spiritual convictions become optional preferences.

For example, if a man is single and frustrated with his perceived lack of potential dating companions, his confidence and self-esteem begin to falter. Soon, desperation and impatience set in. Subsequently, he questions whether his standards are too high or whether his morality hinders his relational opportunities. Thus begins the slippery slope to betraying his beliefs and settling for less than God’s best.

For this very reason, we find shelter in God’s Word! Satan’s whispered deceit should drive us deeper into Scripture. Instead of buying into the devil’s counterfeit reality, we should stand firm on the solid rock of our faith. Our spiritual success depends on whether or not we will listen to “Thus says the Lord” instead of our adversary’s lies. This is precisely what Jesus did in His wilderness temptation: He responded with, “It is written.”

The following four steps help us be successful against Satan’s attacks, maintain high self-esteem, and remain true to spiritual convictions:

If God is for us, who can be against us? (Romans 8:31). Walk confidently in His steadfast love, base your value and identity in Him alone, find comfort and shelter in His Word, and follow Him closely.