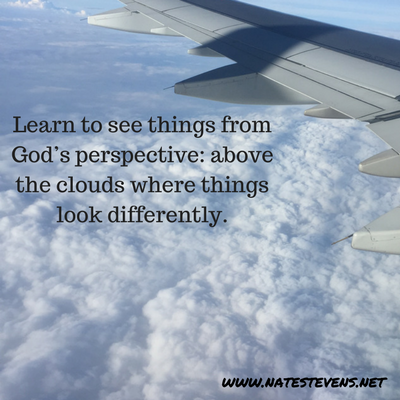 The sun still shines above the clouds.

An overnight storm left behind its overcast and gloomy skies. It made my drive to the airport rainy and messy. Upon arriving, I then waited for an eternity trying to get through security. Missing my flight would be the icing on the cake for this “beautiful” day.

The gloomy weather, coupled with my long wait, put me in an awful mood. I was still grumpy when I finally boarded the plane.

The seat was by the window and I could see the ground crew waving their orange cones as the plane was pushed from the gate. After slowly taxiing around in the rain, the pilot finally announced we were next in line for takeoff.

The engine’s thrust that hurtled us down the runway also pushed me back into my seat. Since it still amazes me how something seemingly so earthbound can take such heavenly flight, I strained my neck forward to look out the window. Outside, I saw the dark clouds blanketing everything. Raindrops streamed across the window obscuring my view. Not much to see anyway….

Then suddenly, the plane broke through the clouds and the brilliant sunlight that was reflected on the dazzling white clouds almost blinded me. It was breathtaking to realize these were the same clouds that looked menacing and depressing from beneath them.

Isn’t that just like life? The storms roll in and gloomy skies surround us. From our earthbound perspective, all hope seems lost. We become discouraged, depressed, and sometimes grumpy. However, above the clouds awaits a new, fresh, bright outlook. The sun is still there.

This experience was a divine reminder that no matter how large my problems seem, no matter how insurmountable the task, no matter how bleak the future appears, I’m only seeing the bottom half of the clouds. From God’s perspective, above the clouds, things look much different.

So take a lesson from one gloomy, yet transformed traveler. When Jesus said, “Lift up your eyes,” He was asking us to get a different perspective. He asks that we view things the way He sees them. He asks that we trust Him with all our cares and troubles. From His viewpoint, though the storms rage in your life, the sun is still shining. He is still in control and the clouds will pass.