Admission of a Violent and Undeserved Attack 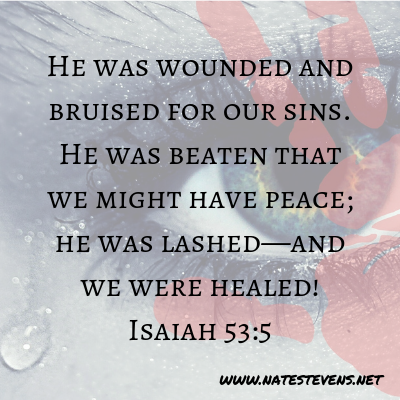 I hate bullying—when stronger, more influential people take advantage of the weaker. When I hear of such an attack, something inside revolts and I want to lash out at the offender(s) to make them pay and put them in their place. One such occasion still haunts me.

I first sensed the perpetrator approach the innocent victim. His sneer betraying a haughty attitude; challenging accusations revealed evil intentions. Yet the victim didn’t try to escape, he merely stood his ground. I watched and waited. Surely, the victim would defend himself or leave. At least shove the aggressor away?

As the confrontation escalated, this evil-minded, manipulative culprit began physically abusing the victim. First shoving, then punching. The victim seemed overwhelmed and I thought for sure he would respond. Even landing one solid blow would make the perp back down. As much as I detested this cowardly attack, I was irritated that the victim didn’t defend himself, run away, or at least call for help.

As is usually the case, with the physical attack also came verbal and emotional abuse. Leering, name-calling, and filthy threats spewed undeserved hatred on the victim. Yet, I watched him stand there absorbing every blow and insult. I wanted to help, but it was like watching a wreck—I couldn’t look away or move. I just watched helplessly, immobilized, entranced.

By now the attacker was pummeling the victim. Blow after blow, blood spurting with each impact, clawing, scratching, kicking. Hair snatched out, muscles and tendons bruised and torn, flesh wounds streaming red. Bloodied lips, puffy eyes, throbbing cheekbones, body blows. I thought, “How much more until he responds or reacts?” Still, I did nothing to help.

Somehow, I instinctively knew what would happen next. Human cruelty and brutality at this mindless, frenzied level doesn’t stop of its own accord.

As metal pierced flesh, cries of agony echoed in the darkness. Yet, the victim still didn’t ask for help. He allowed the continued assault without a word or defensive act. Now I’m almost angrier at the victim for his timidity than the perp for his attack.

I had to act—had to step in and stop this. I hated this one-sided affair. Why must this hoodlum violate another human being? Mind ablaze, heart filled with fury, stomach in knots, and fists clenched, I determined this wouldn’t end well for this brutal attack. Somehow, he would pay. I would see to that. Someone needed to rescue this poor guy.

But I still couldn’t move. What was wrong with me? He needed help! Would no one rescue him? Would everyone forsake him—even me?

For whatever reason, I looked at my hands—they were bloodied and bruised. My left hand grasped long, jagged nails, my right hand clenched a hammer. What was happening? Where did these come from? What was I doing? No, no NO! This cannot be!

The sickening reality nauseated me. My hands were killing this man. My foul mouth hurled the filthiest words imaginable. It was my deceitful, desperately wicked heart that lashed out in hatred and anger. I was the perpetrator!

As I beat him to death, the victim looked into my soul. As my repulsive realization flooded my mind, love beamed from his face. Why wouldn’t he defend himself? Why look at me that way?!

Somehow, I knew he could have vaporized me into oblivion. He had immeasurable strength exceeding my comprehension. Yet he stood there, tears flowing down a broken face, taking my violence, loving me through my hatred and defiance. He willingly stretched out his hands to receive my nails, not hiding his face from my repeated blows.

As much as I abhor violence and usually want to rescue such victims, I shuddered to know I did this. Without cause, I abused him. Without provocation, I caused his pain and brokenness. My willful hatred battered him. My evil, cruel intentions lashed at him. He had done me no wrong, yet my depraved heart wanted him dead.

Wearied with beating him into a bloody, unrecognizable pulp, my victim then stunned me. Reaching bloodied, bruised, and broken arms toward me, he engulfed me in his loving embrace, supporting me while I still held my weapons. Before He fell, he whispered, “I forgive you.” Why would he do that? What was the reason behind such a beating? Why willingly relinquish his life because of my wickedness? What compelled him to react like that after what I had just done to him?

One reason alone—love. God’s unmatched, unconditional, incomprehensible, eternal love. For God loved the world so much that he gave his only Son so that anyone who believes in him shall not perish but have eternal life. (John 3:16, TLB)

We despised him and rejected him—a man of sorrows, acquainted with bitterest grief. We turned our backs on him and looked the other way when he went by. He was despised, and we didn’t care. Yet it was our grief he bore, our sorrows that weighed him down…he was wounded and bruised for our sins. He was beaten that we might have peace; he was lashed—and we were healed! We—every one of us—have strayed away like sheep! We, who left God’s paths to follow our own. Yet God laid on him the guilt and sins of every one of us! He was oppressed and he was afflicted, yet he never said a word. He was brought as a lamb to the slaughter; and as a sheep before her shearers is dumb, so he stood silent before the ones condemning him. (Isaiah 53:3-7, TLB)

God showed his great love for us by sending Christ to die for us while we were still sinners. (Romans 5:8, TLB)