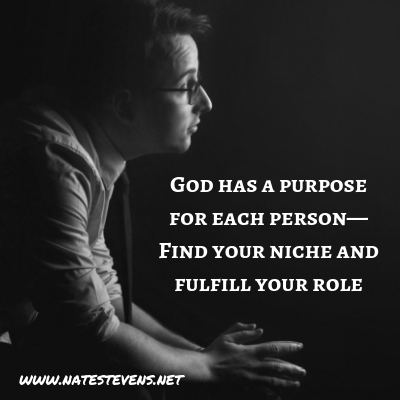 God’s calling and purpose reach people in every status, stage, and walk of life.

We have no record of Elijah’s qualifications, Mary’s wealth, or John the Baptist’s education, yet they burst on the scene and were used mightily in God’s purpose. Little known Jephthah was a man of valor, yet the son of a prostitute. His half-brother rejected, disowned, and disinherited him. Yet, God eventually used him to deliver Israel. If your life resembles this group of people, please do not be ashamed or feel inadequate.

Moses, Daniel, and Paul all had impeccable education and training. Rachel, King David, Abigail, and Esther were unusually attractive. Jehu was a furious charioteer. Nimrod was a mighty hunter. If you are in this category, please do not be embarrassed or proud of your accomplishments or blessings.

God calls the Young as well as the Old

Samuel was a mere child when God spoke to him in the stillness of the night. Abraham was one-hundred years old when Isaac was born. Anna, about eighty-four years of age, still served in the temple and was there to hold eight-day old baby Jesus.

Though God chooses as He pleases, a caution is attached to our responses. He rejects those who do not fully obey and surrender to His will. He rejected Saul, left Samson, hated Esau, and abandoned Balaam.

God Calls to a Purpose

From all these examples, we can learn one principle: God has a purpose for each person. Everyone has a unique role to fulfill in His overall plan. All He asks is something everyone can give—unwavering obedience and wholehearted surrender. No matter your upbringing, education, social status, or genetic makeup, He has a role and purpose for you. Find your niche and fulfill your role—but remain obedient to His influence, complaint to His Word, and surrendered to His will.

God’s calling is not an open-ended invitation to fulfill His purpose as we please. He still actively engages and directs our steps to deliver His plan, His way, in His timing. We simply have the privilege of contributing to it.

As an example of God’s interaction even when it conflicts with human reason and effort, consider Gideon (Judges chapters 6-7). God commissioned him to deliver the Israelites from the oppressive Midianites. Realistically, he would need a large army to fight the one-hundred and thirty-five thousand enemy force. Yet, even after gathering thirty-two thousand armed men, Gideon still doubted his calling and tested God twice.

In Gideon’s assured, prepared, and arrayed state, God returned the favor and tested him twice. “The people you have are too many.” Such a large army could easily take personal credit for the victory. At the Lord’s leading, and the reduction to three hundred warriors, God assured Gideon the remaining men would be His method of deliverance.

Gideon called many to the battle, but God chose an alert, valiant handful who would know the battle and victory were God’s alone. Jesus summarized God’s selection process when He said, “Many are called (or invited), but few are chosen” (Matthew 22:14, parenthesis added).

Who and How God Chooses

By dissecting the first chapter of Paul’s letter to the Corinthian church, we discover powerful elements to God’s selection process and perspective (verses 26-31).

He usually does not select the:

Unfortunately, with human nature being what it is, there remains a tendency for those with these characteristics to be full of themselves, self-centered, and distracted from spiritual things. Since God is omniscient, He already knows how each person will respond. So, His non-choice here is not personal rejection as much as it is a foreknowledge of misuse.

However, He does choose the:

Why does He choose to pursue His work this way? So no one can glory (exult, boast, be proud, or take the credit) in His presence. As Supreme Lord over everyone and everything, He deserves all the credit, honor and glory. He seeks those individuals who will contribute to His plan while obediently serving Him and giving Him all the honor for the outcome.

If God has called you to a specific purpose or task, certain precautionary steps ensure an outcome that is acceptable and pleasing to God (Romans 12:1). First, understand that He will complete it with or without your help. It is a personal privilege, not a right or entitlement, to participate in His purpose. Secondly, accept the responsibility and serve Him humbly. He strengthens the humble but resists the proud (1 Peter 5:5). Thirdly, stay alert through His various tests. They are intended for your growth, not your failure.

If you feel unqualified, unprepared, unskilled, or insignificant, great! That is precisely what He wants! From that perspective, you will understand accomplishments are His working through you and you cannot take the credit for what He does. His purpose prevails. Being a part of it, in His way and timing, is an enormous privilege, responsibility, and blessing.

But be careful who you ask to join you in the endeavor. As in Gideon’s case, God may send them back home. He chooses individuals—allow Him to bring along and/or separate as He chooses. He ultimately knows what and who is best for each specific assignment.

Forge ahead confidently, walking in His light and power, humbly and obediently heeding His voice and following Him. The outcome is His—trust Him with it.