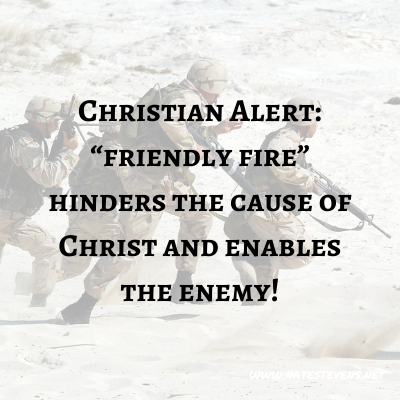 As Christians, why do we continue to shoot ourselves in the feet—or worse, in the back?

“Friendly fire” is a military term referring to casualties suffered as a result of accidentally shooting those on the same side in the chaos of war. I find this term quite fitting for what I see on social media and various political posts from so-called “Christians.” I firmly believe part of the 2020 election chaos and close outcome is the result of such “friendly fire.”

Novel idea: Christians are supposed to be on the same side. But it is exhausting to engage in the daily battle for righteousness while taking incoming rounds from our “own.” If we could ever get our heads on straight and our weapons pointed to the right opponent, we would be a formidable foe. Here’s a crazier thought—we might even be able to usher in a genuine, blazing, spiritual revival across our land! Lord, help us!

Unfortunately, it appears we are bent on self-destruction. “Friendly fire” seems to be the norm. Selfish agendas. Personal feelings. Age-old stigmas. Die-hard prejudices. Hand-me-down alliances. Flat-out apostasy. These all override God’s Word and the Holy Spirit’s call to unity in our spiritual warfare against a common enemy. Scripture never encourages “switching sides” to get our ways, elect our favorites, enact our preferential legislative acts, or ignore the spiritual battle in which we are called to engage. The world may make such slippery bargains. Christians don’t.

Instead of taking marching orders from personal feelings, the mainstream media, or various social outlets, Christians are to take their marching orders strictly from God’s Word. Nothing more is needed; nothing less will do.

Christians are to be separate from the world in thoughts and actions [2 Corinthians 6:17]. We are to be distinctly different from the world’s passions, political agendas, and preferential tolerances [Ephesians 2]. “No one engaged in warfare entangles himself with the affairs of this life, that he may please him who enlisted him as a soldier” [2 Timothy 2:4, bold text added for emphasis].

Guess what? God is who enlisted us! We’re in His military! The battle is fierce and we need our full armor on and weapons ready [Ephesians 6:10-18]. Additionally, our adversary has been identified for us [1 Peter 5:8] and it’s not each other!

Coupled with our battle gear and marching orders, our Spiritual Commander-in-Chief has given us His battle plan. Scripture is very clear on what is righteous and what is wicked. God points us toward the battles of sin right in front of us. But, oh no; we steamroll over all that and continue shooting each other in the backsides!

You may be thinking, “Nate’s gone over the edge. He’s now certifiable.” Wrong on both accounts. I’ve been a veteran observer from an increasingly chaotic foxhole. Sadly, we shouldn’t even have to caution against such “friendly fire.” However, it is influencing the tide of the battle against the cause of righteousness.

I’ve heard too many people, identifying themselves as Christians, revealing actions, words, and behaviors confirming they are either truly not on the same side of the spiritual battle. That, or they are misguided as to what our Spiritual Commander-in-Chief expects of those He has enlisted.

I am not perfect nor have I ever claimed to be. However, when Christians spew rhetoric and voting preferences that directly oppose God’s Word, I duck for the nearest foxhole suspecting their identity and intentions. Their “friendly fire” opposes the effort of bringing our country to God. While many Christians fervently pray for spiritual revival, others spray bullets in the foxholes.

It’s Not About WHO, It’s About WHAT

To those who whine, “But I don’t like this or that candidate,” I say, “It’s not about who, it’s about what.” The entire platform, agenda, and intentions go hand in hand with the vote. So, get over your hurt feelings or contempt and look at what your vote approves.

Here is one prime example. God is very plain—unrestricted abortion is wrong. It’s not a choice nor is it even about a choice. Life comes from God and begins at conception [Psalm 139:13-16]. Children are a heritage of the Lord [Psalm 127:3]. God severely punished the Israelites for sacrificing their children to idols. All throughout Scripture, we find God’s fondness and protection of infants and orphans. So, how could a “Christian” ever vote for anyone who promotes, funds, and enslaves people with such an evil mindset?

But, besides all that and in the face of all arguments, answer this question. Why does the most innocent victim (baby) of all people involved (mom, dad, doctor, politician, lobbyist) have to pay the steepest, most painful, gruesomely grotesque price (death)? That is horrifyingly unconscionable for anyone, much less a “Christian.”

Imagine yourself standing before God and explaining your vote to murder innocent babies because you didn’t like a candidate, the tone of his tweets, or his portrayed antagonism toward consistently hateful hordes of assailants. So you don’t like the guy. Okay. But your vote in opposition just killed thousands of more babies and promoted a godless, perverse, lawless agenda. Pretty small defense…

Examine Each Issue with God’s Word

Some may say, “But I haven’t killed anyone nor was I present when those ‘masses of tissue’ were aborted.” Or even more ludicrous, “It’s my body, my choice.”

First clue: they’re not “masses of tissue.” They are living human beings, indefensible babies, our blameless, helpless offspring who rely on grownups for protection and safety. Besides, since when are we so audacious to call God’s tenderest creation of life “masses of tissue”? That’s an unbelievable and false narrative.

Second clue: it’s not about personal choice. Never has been. “My body, my choice” is simply illogical. Try taking your body and run around town naked. Your choice with your body will get you arrested for indecent exposure. This argument also fails in view of the corona virus mask mandate. God sums it up nicely: Your body is not your own, it is His. Therefore, “glorify God in your body and in your spirit, which are God’s” [1 Corinthians 6:19-20, bold text added for emphasis]. “Your body” is a loaner vehicle from God Almighty. You surrender it at death. Inevitably, we will all stand before Him where He will hold us accountable for what we did in and with His vehicles [Romans 14:10].

Third clue: God is clear about aiding and abetting criminals. If we see or know about someone doing something wrong, and we do nothing, God will punish the evildoer. But He clarifies, “his blood I will require at your hand” [Ezekiel 3:18, 20; 33:6, 8, bold text added for emphasis]. When a “Christian” votes for anyone, at any governmental level, who supports, promotes, and funds abortion, the blood of those tiny victims is on his or her hands. Drenched in innocent blood, they will answer to God one day. I didn’t say it—God did. Take it up with Him.

Oh, but someone says, “That’s why I didn’t vote—all candidates are worthless.” To me, that means defection and desertion from the very military unit God has called us. The world will always aggressively fight for its sin. By not countering its vile attacks on righteousness, morality, and general decency, those who do nothing are just as guilty for the moral ground surrendered. “To him who knows to do good and does not do it, to him it is sin” [James 4:17, bold text added for emphasis]. There is no escaping personal accountability for our actions or inaction.

And that is merely one of numerous evil, twisted political and legislative issues. There’s a whole host of other degenerate agenda items to fight against. But we have to stop whining and complaining about this or that minor issue, that seemingly demeaning tweet, or a holier-than-thou standard for politicians that we ourselves can’t live up to. We must acknowledge the common enemy—the world, sin, the devil, and their immoral agenda.

Yes, I’d love to have two or more candidates with equally brilliant ideas on governing for the good of all citizens. But when we have a choice between even an atheist who condemns and actively opposes immorality such as abortion and a candidate who fully promotes it, the choice seems quite clear.

Friendly fire introduces a perplexing dilemma. Maybe not all who identify as “Christians” are truly that. We do live in a day and age where we tolerate absurd notions of identifying as an opposite gender, a younger age, or even as a tree! So, it’s not far-fetched to envision imposters within the Christian ranks [Matthew 7:15].

I expect such sinful nonsense from the world. Their moral compass is broken. They don’t believe the illuminating truth of God’s Word. They don’t have the Holy Spirit of truth living inside. But, therein lies the differentiating characteristics of a Christian! Jesus said Christians have been spiritually reborn [John 3:3, 7]. Paul confirmed Christians are indwelt by the Holy Spirit [Romans 8:9-11].

Major clue: The Holy Spirit never promotes or condones anything contrary to God’s Word. He never sends mixed messages. So, if someone claiming to be a Christian blatantly votes against something clearly conflicting with God’s Word, he or she is either not listening (quenching the Spirit) or not indwelt (not really a Christian). Both are equally dangerous.

That’s not being judgmental any more than a referee is judgmental by calling a foul. It’s sound Biblical doctrine, plain and simple. Again, any argument is with God and His Word.

So, the rallying cry goes out to Christians. If you are truly a believer in Christ and have His Spirit living within you, deafen your ears to the world. Listen only to God. Saturate yourself with His Word. He never contradicts Himself or His Word. Forget political parties and voter registration affiliations. Yield yourself, your mindset, your desires, your life, with all its actions and decisions, to Him.

If you are not truly a believer, then please, for the sake of all decency, do one of two things. Stop calling yourself a Christian—we’re tired of you shooting the wrong side! Either that, or humble yourself before God in genuine repentance, and ask Him to save and transform you by the renewing of your mind [Romans 12:2]. Only by doing this can you become a genuine Christian, saved from an eternity in hell, and enlisted in God’s righteous army.

We welcome true soldiers of the cross of Christ! We need your help and rely on unified strength! But we simply must avoid “friendly fire” at all costs! It’s killing us and enabling the enemy! May we keep our eyes on Jesus and our weapons pointed at the enemy of our souls and all for which he stands!

May we be found faithful in all we do until Christ’s imminent return. Even so, come, Lord Jesus!