Courage to Embrace Your Executioner 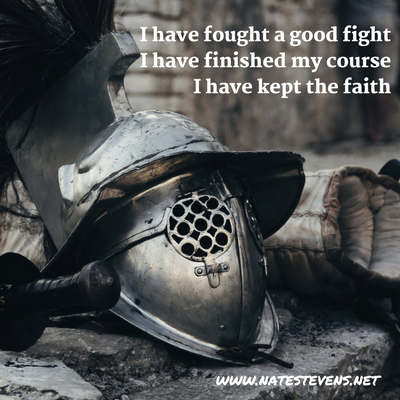 I’ve killed many men in battle. As a Roman soldier, I’ve honed the act of killing to an art of precision. You are present, I have a sword, you die. Direct, simple, efficient. I’ve taken so many lives, the fading light in dying eyes no longer haunts me. I now consider it a sign of doing my job well.

Every warrior knows the next battle could be his last. It’s what inspires him to fight fiercely, fully, and honorably. If it is the final fight, he exits with head held high. However, during my final battle, a gutless, back-stabbing leg-slicer cut me. Lacking the honor and courage to confront me face to face, he attacked from behind. So, I made him pay for his cowardice. I cut him deep, then stood on his throat until he died.

Yet, my injury left me unfit for battle and I was assigned the duty of prison executioner—a job specifically suited for my skills. Cold heart. Dead conscience. Strong arms. Sharp blade. Qualified, able, and ready. Climb onto my platform, and my efficiency begins your finality. Kneel down, arms tied behind you. Lean back and rest on your heels. Tuck your chin to your chest. If you have long hair, tuck it across the nearest shoulder so it doesn’t shift in the wind. Then, one slicing blow. Nothing left but to clean up your remains—and that is not my job. I hear nothing; I feel nothing. The jeering crowds, the weeping relatives—I pay them no mind. Simply put, I have a job to do.

I have no identity or friends and prefer it that way. Nor do I recall my name or the last time I heard it. Everyone simply calls me “Executioner.” That is acceptable and efficient as it ties my identity to my job. No one asks, “What’s your name?” They know what I do.

I keep my distance from prisoners, not because I fear attaching with them emotionally. No, that part of my soul died long ago. I am beyond feeling anything. So, I keep my distance because I don’t care—about them, their dire circumstances, their guilt, or their innocence. None of that matters to me. I specialize in death. It is swift and efficient, with as little energy spent as possible.

Yes, I’ve executed the innocent. It bothers me not. To arrive in my presence, they must have done something unfavorable to someone of authority or power. Everyone dies sooner or later. I simply hasten the inevitable.

Some prisoners beg for mercy, pleading their innocence. Others are stoic, hoping to exit this world courageously for family honor. Most are silent, confused, in denial as they stumble toward the end of existence. Their mental state is of no consequence to me. I care not nor do I entertain thoughts about their fear, denial, or acceptance. I’m unsympathetic in dispatching them, then indifferent while preparing my blade for the next encounter. Stone cold indifferent killer.

That is, until Paul.

Until a Prisoner Named Paul

I heard about him through the prison rumormill. He was accused of many things. Political disturbance. Religious upheaval. Rabble-rouser. None of that mattered to me. I simply listened to the stories while awaiting his eventual arrival on my platform. Apparently, he’d been in and out of several prisons. He’d been beaten, stoned, shipwrecked, and snake bit. So far, he was a survivor. But his survival skills would fail in my presence.

I questioned his honor and integrity upon hearing he murdered and imprisoned men, women, and children who disagreed with his religious views. There was no honor in that—unless he was following orders. If he did it in anger, impatience, or arrogance, that was unacceptable. But if he had orders, I could understand his actions.

I observed him several times in the prison courtyard. Nothing impressionable to me. Frail, non-threatening, old man. Furiously writing away. Parchment after parchment. He seemed preoccupied, as if desperate to finish something before his finality. I cared not.

Until his day of inevitability.

The orders came, “Prepare for Paul’s execution.” So, I began my simple yet precise routine. Inspect my platform, polish my blade, and await his arrival.

But my orders changed. The execution would take place in his prison cell. So be it. I cared not aside from the inconvenience of my routine. Would the cell have sufficient space for the arc of my blade? Did enough light reach there to see clearly? Would he be tied as expected? Or would I have to wrestle him to the floor, knock him out, and tie him into position? Would his loyal followers be in the cell with him? Or would they stage a protest or try to resist?

Arriving with the jailer, I noticed some men huddled near the entrance. They appeared sad, resigned by their friend’s departure by my hand. Of course, they didn’t challenge me, but seemed unnervingly peaceful. Why were they here? Did they not understand what was about to happen? Were they waiting to pounce or strike? One was apparently Paul’s doctor, who was about to lose a patient. Another was much younger, possibly a protégé? None of them appeared particularly threatening nor would they be worthy opponents should they challenge me.

Since Paul’s cell was below the main entrance, I would be lowered through a small hole in the floor. This was a vulnerable approach and I cursed my concern to the jailer. He cursed back, disdaining my job, discomfort, and safety. It was simply an assignment.

With watchful eyes on the men, I was slowly lowered. Overhead, the men encircled the opening, but my mind was wary to what awaited me below. Reaching the floor, I crouched, eyes adjusting to the dim light streaming from the small entry, dust particles dancing in its beams. For some unknown reason, I shivered in the musty, damp room.

I sensed conflict—violent death raging against peaceful acceptance. The cramped cell bothered me. Out on my platform, I would have already completed this assignment.

Instead of cowering in a corner or making me chase and subdue him, Paul hobbled toward me, his gaze meeting my glare. His piercing, brown eyes, seasoned and wrinkled by life, held no trace of fear, anger, hatred, or violence. On the battlefield and on my platform, I was accustomed to seeing those responses. But these eyes, staring into mine, peering past the masks and dark corners….what was I seeing? Peace? Tenderness? Forgiveness? Love? What was happening? Is he trying to hypnotize me? Trying to cast one of his nonsensical spells on me in the name of his god? Little good that would do! I’m impervious. Maybe years ago, when I cared; but not now.

Still, his eyes burrowed into my shriveled soul.

He approached, slowly raising his hand, non-aggressively, but purposefully. Sweat dripped as I gripped my sword tighter. If this old man so much as twitched, I’d dispatch him as unceremoniously and violently as I could. I cared not!

He shuffled closer….closer….until he placed his hand on my chest. Human touch. Strange sensations. It had been years. Who did this prisoner think he was to invade my space, ignoring my threatening countenance? How dare he not fear me and touch me! Warriors don’t touch each other unless it is by blade! Yet here he was, reaching, touching, stirring embers of a long-forgotten ache. Was it regret? Remorse? The lost value of human life? A spark of…..what? Innocence? Something divine? What was happening?

I needed to swing my blade quickly, get pulled out of this room, and return to the routine and comfort of my platform!

Hand on my heart, eyes intently on mine, he whispered something. Why did I care that I couldn’t hear him? He whispered again closer. Leaning in, I heard him rasp, “May the love, grace, and peace of God’s only Son, the Lord Jesus Christ, be upon you.” Looking upward, he continued, “God of all mercy, do not hold this man accountable for my death. Please forgive him,” then lowering his eyes to mine, “ as I have forgiven him.”

Forgiveness? Love? Grace? Peace? God’s Son? Lord Jesus? Words swimming in my head. Concepts I had previously murdered in my heart. These were sweet characteristics borne only by the weak. Nonsense! Rubbish!

Yet, there he stood. Arms unbound. Willingly approaching, embracing, and forgiving his executioner. Knowing what was about to happen. Exuding strength, not weakness. Peace, not fear. Acceptance, not resistance. What did this old, withered, prisoner know about death that removed its sting? How could he be so bold, so brimming with courage, so noble, yes, honorable in the face of imminent death? What did he know about the hereafter that banished doubt?

Who was this man? What did his touch and gaze do to me? His hand lovingly reached beyond my calloused defenses. Steady eyes peacefully illuminated recesses darkened long ago. But why did I care?

For the first time in years, I regret having to do what I’m about to do. I would enjoy more time with this weathered, honorable warrior. To learn the secret of his resolve, his peace. I’d love to understand his compassion, his ability to forgive. To identify the reason for the hope reflected in his eyes. Even to ask how he can kneel so calmly before me. Hands clasped in prayer, head bowed, ready and surrendered to my blade.

Yes, there is enough room to swing my sword. But somehow, I no longer want to. It feels foreign in my hands. I cannot see clearly, yet I’m not ashamed of my tears. In this man’s presence, it seems okay somehow. He understands. But I have my orders.

Please forgive me, worthy warrior. His final words, whispered to a realm unseen, still haunt me.

For I am now ready…the time of my departure is at hand. I have fought a good fight, I have finished my course, I have kept the faith: Henceforth there is laid up for me a crown of righteousness, which the Lord, the righteous judge, shall give me at that day: and not to me only, but unto all them also that love his appearing. (2 Timothy 4:6-8)