Dating Advice from Saul and David 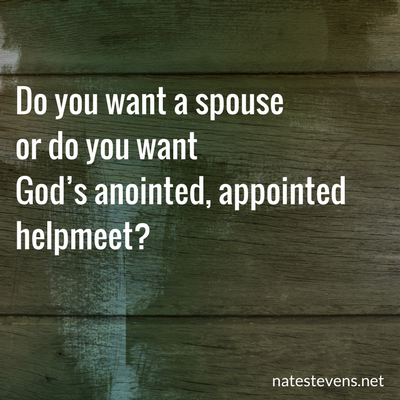 Dating advice starts with a question: Do you want a spouse or do you want God’s anointed, appointed helpmeet?

Some people may question the difference. If I find someone willing to marry me, won’t they automatically become my helpmeet? No, not necessarily.

To further explain, let’s look at the lives and legacies of King Saul and King David. Both men ruled over God’s chosen people, but they lived quite differently. As a result, they experienced far different life outcomes.

Saul was a handsome hunk who was taller than everyone. That description alone probably matches him with a majority of all women’s online dating profiles. As a young man, he was shy, humble, courageous, and courteous. Bingo – spouse material!

But here is the problem. God was Israel’s king. He created them, chose them, and wanted to have a special relationship with them. But they wanted a human king so they could be like all the neighboring countries. God, I want what everyone else has! All my friends have someone special – I want my own! Now! In essence, they rejected what God offered.

So Samuel found and anointed Saul as the Israelites’ new king. But he warned that they would soon realize what an evil thing they did in asking for a king (1 Samuel 12:17). Having a human ruler was not bad in itself. The evil part was in wanting something instead of God. What they wanted so desperately came at the expense of their relationship with God and His optimal choice.

In reviewing King Saul’s life, we find that he disobeyed God several times. He became moody, began threatening those close to him, and disastrously lost the kingdom. Sound familiar? When we start relationships out of desperation, jealousy, loneliness, or emotional immaturity we usually regret them. Even God said He regretted having made Saul king (1 Samuel 15:11). Shortly thereafter, he died in battle along with his sons.

We find a much different story in David’s selection as king. He, too, was a handsome young man. He was courageous, had a strong work ethic, and was loyal to his family and his responsibilities. Now that’s my kinda man! Handsome, strong, athletic, employable, loyal – sign me up! Not so fast there, killer!

When Samuel looked for someone as Saul’s replacement, he started with David’s older brothers. But God gave Samuel some advice we should all apply to our lives. The Lord does not look at the things people look at. People look at the outward appearance, but the Lord looks at the heart (1 Samuel 16:7).

God encouraged Samuel to look beyond the outer appearance – to the inner qualities. God had someone special in mind and Samuel needed to wait for him. After considering all his brothers, Samuel finally faced David. That is when God made His choice known: This is the one (1 Samuel 16:12).

Yes, David made some serious mistakes. But through it all, his heart was tender and humble before God. God blessed David’s kingdom and promised that through his family the promised Messiah would come. As the fulfillment of that prophecy, Jesus Christ was born of David’s lineage. David’s legacy is summed up in Acts 13:22: God testified concerning him: “I have found David…a man after my own heart.”

Two eligible and desirable choices, yet what a vast difference. With Saul, the selection was hasty and God’s input was ignored. As a result, he turned out to be a regrettable choice in all respects. With David, the decision was made to choose God’s selection. And God provided “a man after His own heart.” God’s choice, God’s blessing, God’s heart, and God’s way.

It may seem overly simplistic to apply this to the pursuit of a potential marriage partner. Especially since “the heart wants what the heart wants” and our eyes are filled with desirable things. But keep in mind, your heart is deceitful (Jeremiah 17:9) and Eve’s eyes led her astray.

It is much better to allow God to fully prepare you, then to bring His anointed and appointed person into your life at the right time and in the right way. To choose without His blessing only invites regret and disaster. When you become who you were created to be, fulfill God’s purpose for you, live for Him how and where He wants you, and then trust Him to align your journey with His anointed and appointed helpmeet, you receive God’s blessing.

So stop chasing the “Saul’s” of life and allow God to bring His “David” to mutually fulfill the course God has for you. You won’t regret God’s choice.