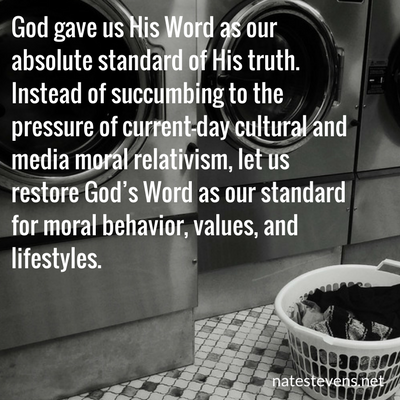 But he who looks into the perfect law of liberty and continues in it, and is not a forgetful hearer but a doer of the work, this one will be blessed in what he does. (James 1:25, NKJV)

I was washing my teenage son’s dirty laundry. Any parent knows this can be an unpleasant adventure, to say the least. As a single parent, I’d done this numerous times. Admittedly, many different brands and types of laundry detergent all claim to work on multiple colors and in varying water temperatures. However, I continued washing our clothes all mixed together thinking my effort was effective.

Then last week, my son brought home a brand new white T-shirt from one of his school activities. As I loaded the washer, that shirt stood out from the other “white” clothes. Why? Because its pure and bright white color made everything else look opaque, maybe even beige. I was disappointed to realize my best intentions and efforts, coupled with the latest detergent product on the market, were not cleaning as well as expected. Though following the same laundry routine I used for years, my results failed when compared to the whiteness of that new shirt.

Then the thought struck me. Isn’t that precisely what we try to do with our personal morality? Today’s cultural relativism allows the tolerance of everyone’s level of morality. Or worse, the lack thereof. What I consider “wrong” may be “right” to someone else. Something I’m doing may be offensive to someone else. It may initially feel comfortable to accept the world’s moral definition of relativism and political correctness. However, it is ultimately confusing, unsettling, and disappointing.

Judges 17:6 and 21:25 tell of a similar time when “everyone did what was right in his own eyes.” We find this widespread “relativism” soon led people to do what was evil in God’s sight. Tolerating such a lenient philosophy of “everyone doing what they feel is right” accelerates the downward spiral of immorality. Even with our best effort, replacing God’s standard of morality with our own individual desire, convenience, or interpretation is the first step toward immorality.

God gave us His Word as our absolute standard of His truth. Instead of succumbing to the pressure of current-day cultural and media moral relativism, let us restore God’s Word as our standard for moral behavior, values, and lifestyles.

Let’s not get caught with a spiritual closet full of dingy-looking, dirty laundry.