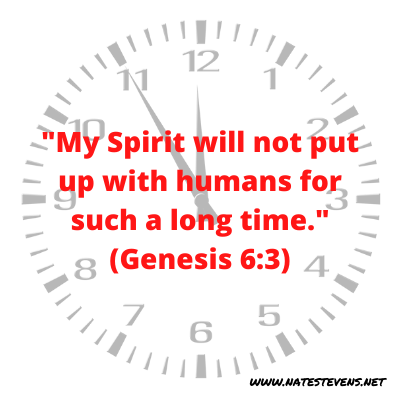 Is there ever a time when God gives up on us? What could or would prompt Him to give up on us?

Before quickly dismissing such a sobering question and disturbing thought, bear with me as we look to Scripture and history for answers. Contrary to what some might believe, God is not a doting, grandfatherly-type essence who graciously winks at our indiscretions, grants us free license to do whatever we want, as long as we want, without consequence. That view, though popular, is simply not supported with Scripture.

Yes, God is “longsuffering and abundant in mercy” [Numbers 14:18] and “not willing that any should perish” [2 Peter 3:9]. However, there is ample evidence of situations and occasions when God does in fact give up. But He does not give up out of frustration and impatience. Rather, He does so from absolute foreknowledge and sovereign timeline.

Now, before going all predestination-versus-freewill on me, consider a few thoughts. God is timeless and omnipresent; we are time and spatially bound. He sees the end from the beginning [Isaiah 46:10] and knows all things [1 John 3:20]. We live, act, and decide in the present. In essence, God’s omniscience includes His foreknowledge of the outcome of our freewill choices. As such, He already knows when a person or nation reaches a point of no return. So, He gives up. And that is a scary place indeed!

When God Pulls Away

What does an environment look like when God gives up? We have the Israelite King Saul as an example. God rejected Saul as king [1 Samuel 15:10-28] because of his disobedience, rebellion, stubbornness, and yielding to peer pressure. He disobeyed God by pursuing personal preference instead of obeying explicitly. In rebellion, he resisted God’s Word. Instead of trusting and following God’s clear instructions, he stubbornly pursued personal “knowledge and interpretation.” Finally, he feared what his subordinates thought rather than God. Sadly, “The LORD regretted that He had made Saul king over Israel” [1 Samuel 15:35].

King Saul had it all. Position, power, prestige, God’s presence—all God-given blessings. Yet, he forfeited everything due to his unrestrained desires and undisciplined will. God foresaw Saul’s unrepentant future, rejected him as king, and pronounced severe judgment on him. He forever stands as an example of when God decides to give up.

Your response may be, “That story and concept is Old Testament, under the Law. We’re in the New Testament now, in the dispensation of grace.” That is true. However, God’s character, holiness, and moral standard do not change. “I am the Lord, I do not change” [Malachi 3:6]. To show the consistency between New and Old Testaments, as well as to see how our current society matches up, let’s look at a couple more examples.

In response to the rampant wickedness of Noah’s day, God said, “My Spirit will not put up (strive, struggle, contend, remain) with humans for such a long time, for they are only mortal flesh” [Genesis 6:3]. There comes a time when God’s mercy departs. God set a time limit of 120 years before His judgment fell with the Flood. Jesus confirmed, “But as the days of Noah were, so shall also the coming of the Son of man be” [Matthew 24:37]. We have but to look around to see the same conditions prevalent in society today.

Jesus also said, “Likewise also as it was in the days of Lot…the same day that Lot went out of Sodom it rained fire and brimstone from heaven, and destroyed them all. Even thus shall it be in the day when the Son of man is revealed” [Luke 17:28-30]. In Lot’s day, society was unrestrained, permissive, pornographic, lawless, and perverse. Everyone did as they pleased—deviancy of any sort was accepted as simply alternative lifestyles or progressive expression. Again, the same conditions exist today that reveal we are ripe for God’s judgment. The time of God’s grace is quickly drawing to a close.

Meaning and Implications of “Paradidomi”

“God also gave them up to uncleanness” [Romans 1:24]. The Greek word here is paradidomi that means to surrender, yield, deliver, or give up or over. It also carries the implication of being thrown into prison. Meaning, sometimes God does give up by yielding to our desires. Likewise, the Prodigal son’s father yielded when the rebellious son wanted his own way, yet ended up (imprisoned) ankle deep in pig slop. Up to a point, God restrains us in His mercy, then removes it to allow the judgment (consequences) for choices contrary to His moral standard.

“For this reason God gave them up (paradidomi) to vile passions” [Romans 1:26, parenthesis added]. This is another indication that God indeed gives up on those who persist—yes, even demand, protest, and legislate—to have their own way. If we break down the words “vile passions,” we arrive at disgraceful, dishonoring, shameful, and infamous affections and lusts. Should we desire habits, activities, and lifestyles that are disgusting and perverse in God’s eyes, there comes a time when He makes an adjustment. He yields His merciful and moral restraint and flips a switch in human minds to where they honestly believe their perversity is normal. They won’t know up from down, right from wrong.

“God gave them over (paradidomi) to a reprobate mind” [Romans 1:28, parenthesis added]. In this case, God honors the deviancy of those who constantly refuse Him, His Word, and His moral standard. He surrenders their minds to the twisted perversity they desire. In that state, they are completely deceived—fully persuaded their immoral mindsets and deviant lifestyles are acceptable.

We are living in a day and age when everyone brushes everything together into a beautiful (though delusional) kaleidoscope of autonomous and relative morality. But this perspective conflicts with God’s warning. “Woe to those who call evil good, and good evil; who put darkness for light, and light for darkness; who put bitter for sweet, and sweet for bitter! Woe to those who are wise in their own eyes, and prudent in their own sight!” [Isaiah 5:20-21, 24].