Don’t Hide Your Pride – Remove It 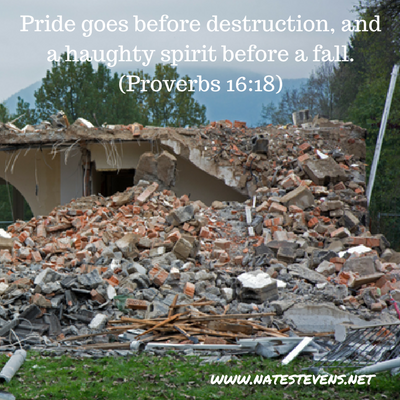 Lest being puffed up with pride he fall into the same condemnation as the devil. (1 Timothy 3:6)

If you believe pride and arrogance are just small character flaws or personality idiosyncrasies, you may wish to rethink that.

Now, I’m not referring to pride in a job well done. I’m talking about an inflated opinion of importance or superiority. The unrestrained, undisciplined mindset that resists or outright rejects human and divine authority.

Such an unattractive characteristic pushes people away while inviting only trouble. For example, being smug with a police officer during a traffic violation usually results in a stiffer penalty. Being arrogant with your boyfriend’s parents probably leads to a breakup. A snobbish attitude on a sports team typically alienates the other players. Such a puffed up, stuck up, egotistical outlook just doesn’t work well with others.

God Hates it Too

Yes, God hates all sin. But according to Proverbs 6:16-17, in a listing of sins called out as hated and offensive to God, pride tops the list. I think it ranks high because, at its core, pride opposes God’s sovereign supremacy and control. It questions and rebels against God’s authority.

Pride is the reason the devil exists. In what some may call allegorical, Isaiah 14:12-21 describes the fall of Lucifer, also known as Satan or the devil.

Lucifer, whose name means “day star” or “the shining one,” was a radiant creature in Heaven. He enjoyed an exalted position of authority and prestige.

Then pride set in. He started thinking. “I will ascend….exalt my throne…be like the Most High…” So full of himself, he envisioned rising above God’s supreme authority.

In response, God reacted swiftly and emphatically to Lucifer’s inflated perception and rebellion by throwing him out of Heaven. Jesus may have referred to this very event when He said, “I saw Satan fall like lightning from heaven” (Luke 10:18).

No, pride isn’t something anyone should ever emulate, entertain, encourage, or emphasize. God gives several warnings against such a mindset.

By comparison, God’s followers are called to walk in humility before Him and with other people. He even explains how and why He wants us to maintain a humble mindset and lifestyle.

Imagine the kind of world it could become if everyone had a humble mindset in all human interactions. Honor would replace disrespect. Willing service would conquer entitlement. Gratitude would drive out selfishness. Love would overcome anger. Peace would overrun impatience.

Now think how a humble mindset would affect interactions with God. Reverence and praise would infiltrate worry and doubt. Submission and obedience would express reliance on Him. Appreciation and thankfulness would overcome expectations and demands.

Please understand, God isn’t looking for wimpy pushovers. He longs for passionate followers who are courageous and trusting enough to yield to Him, His supreme authority, and His sovereign control.

Father God, don’t let pride blind, deceive, or mislead me. Help me to be authentic, real person You created me to be. Please don’t let me be puffed up with a false sense of importance. I submit wholly to You and rely solely on Your supreme authority. Thank You for sovereignly controlling everything for Your purpose. Amen.