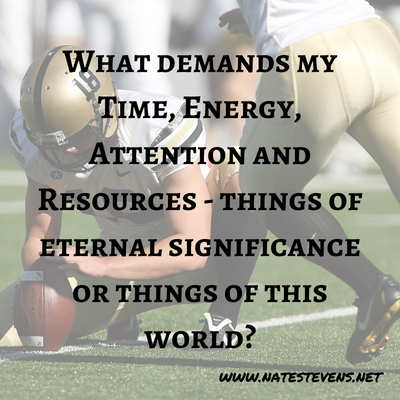 The winning field goal was up and good! Our favored team won! Or had they?

Recently, we went out for dinner at one of those “social” restaurants with televisions plastered everywhere. Naturally, it being the beginning of the professional football playoffs, several games were displayed. The atmosphere was quite rowdy and distracting. Other patrons cheered or booed depending on the action on the field of play. With each whoop and holler, we looked to the television screens to see what happened.

We noticed one particular game between teams scheduled to play that day. The winner would impact our favorite team who had won the day before. The significance of that game demanded our attention and time investment.

As we enjoyed our extraordinarily delicious dinner, we watched with interest as that game wound down to the final play. A game-winning field goal would advance the team we wanted to win. We anxiously waited, then cheered as the ball sailed through the goalposts. Elated, I texted my son.

But our rejoicing was short-lived. He replied, “They haven’t played yet – they play later this evening.”

Apparently, the game demanding our attention was previously recorded, yet without the usual “Previously Recorded” notification. Yes, it was disappointing to be misled and get our hopes up. It was equally disappointing to realize we invested our time, energy and hope in something that held no real significance.

When we arrive in eternity and look back on our lives, I wonder how much of what attracts our time, attention, energy, and resources will be like that football game. Will we wonder, “Why did I waste so much of my time on the ‘things of this world’ that have no eternal significance?”

The importance of this sober realization rests on two realities. One, we only have one life which, like dissipating vapor, is gone too fast (James 4:14). Secondly, we will all stand before Jesus Christ to give account for what we did here on earth (1 Corinthians 3:9-15). It reminds me of a poem my dad often quoted, “Only one life will soon be passed. Only what’s done for Christ will last.”

May we turn our affections, energy, and investments away from the cheap, distracting, eternally insignificant pleasures of this world and prioritize the treasures of the world to come.