Exhausted, But Still in Pursuit 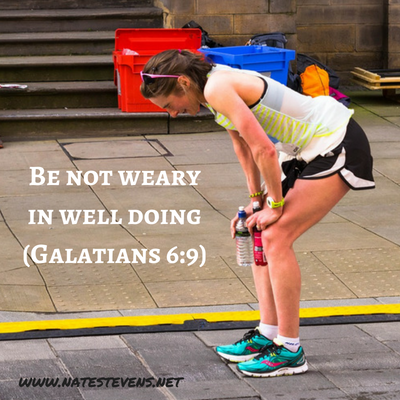 When Gideon came to the Jordan, he and the three hundred men who were with him crossed over, exhausted but still in pursuit. (Judges 8:4)

I’m exhausted. Or, as we say in the South, worn slap out.

Have you ever felt that way? When life hurtles along just outside the parameters of your capacity? When you try your best to prioritize life events, create an orderly schedule, and strategically organize your days—yet life is still too much?

Trying to fit Christian service or ministry opportunities around full-time employment, household responsibilities, weekend chores, and expected family and social interactions can become overwhelming. Things start to slip or you become uncharacteristically cranky, then guilt sets in as you internalize how you mismanaged your time or do not have time to serve God. Yet, you persist, wearily trying to juggle everything, hoping to find relief soon.

Gideon knows exactly how you feel.

After God reduced Gideon’s army from thirty-two thousand to three hundred, Gideon faced the formidable task of battling an enemy numbering one-hundred and thirty-five thousand. Obviously, fighting with the initial army would have made things much easier and certainly less stressful for each warrior.  Yet, the entire burden fell to the remaining three hundred.

Sure, God orchestrated the battle to deliver His promised victory. However, after an over-night raid with pitchers and torches, along with chasing the enemy from the primary battlefield just south of Nazareth all the way to the Jordan River, Gideon and his men were exhausted. And when they stopped for food, they were refused—twice. But they continued and eventually eliminated the enemy.

Exhausted, but still in pursuit. Worn out, but not giving up.

When life becomes too hectic, let’s remind ourselves:

This life can be tiring, nerve wracking, and frustrating. Though exhausted, I encourage you to stick to the fight, continue the pursuit. His high calling and ultimate approval await: “Well done, faithful servant. Enter into My rest.”