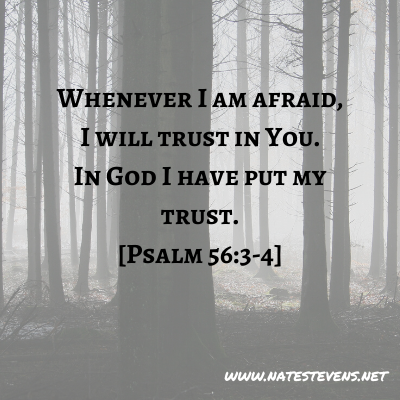 God has not given us a spirit of fear, but of power and of love and of a sound mind. (2 Timothy 1:7]

If we’ve learned anything from this COVID pandemic, it should be this. Fear makes us do some strange things!

In the transition period between when God was terminating Saul’s reign and grooming David as the next king of Israel, Saul had it out for David. Saul knew God had rejected him as king and chosen David so he tried killing David several times.

On one such occasion, Saul’s son, Jonathan, confirmed Saul indeed planned to kill him. As most of us would, should we find out a powerful person was trying to kill us, David got scared. In 1 Samuel chapters 20-22, we find eight fear symptoms David exhibited – and their resulting strange behavior.

Yes, fear normally activates the protective fight-or-flight mechanism that shields us from harm. Yet, fear also encourages foolish behavior and irrational thoughts. This could be why Jesus repeatedly said, “Fear not,” to those confronting fearful situations. Since Jesus never asks us to do something we are incapable of doing, we have the power to face and overcome our fears. So, let’s diagnose each symptom, analyze how they affect us, and then apply God’s antidote.

David left everything. When Jonathan told him King Saul was determined to kill him, David ran for his life. Regardless of past events in his life, this present situation seemed insurmountable. In responding this way, he forgot two important facts. First, he forgot God promised him the throne of Israel. Secondly, he overlooked God’s protection in previous situations (remember Goliath or Saul’s past attempts on David’s life?).

When confronting adversity, conflict, uncertainty, threats, or uncontrollable circumstances, we initially want to run and hide. Fear freezes us. The “rear-view mirror” effect takes over and we see things larger than they may actually be. We also tend to forget God’s past provisions, protection, and blessing. We also overlook the fact that God orchestrates all details, of all circumstances, at all times. Mind you, He doesn’t cause them; but He does orchestrate them to fulfill His ultimate purposes.

When David took off, he was alone and unprotected. As a senior military leader for Saul’s army, being unprotected out in the open wasn’t a wise strategy. It left him vulnerable to other enemies. He wasn’t thinking clearly or strategically. He forgot who he could trust (family, friends, support group).

Usually when we become fearful, we withdraw from others and our usual routine. We respond like this to not appear weak, vulnerable, or out of control. Maybe even to avoid further potential catastrophe from happening. Additionally, we forget we have a spiritual adversary who seeks to “steal, kill, and destroy” [John 10:10]. If Satan can isolate us, he increases the impact of his poisonous, fearful whispers.

Obviously, the situation was unplanned so David left without packing any food. His flight brought him to the city of Nod, where he found Ahimelech, the priest. David was probably starving by now, yet the only thing Ahimelech had to offer was the sacred bread. This was the shewbread from the Lord’s altar that only priests could eat. David was technically forbidden from eating it, but drastic times call for drastic measures.

Fear restricts our basic needs and desires. In the frenzy of fear, we often do not take care of ourselves. We withdraw, often forgetting to eat. Then, we become fatigued and subsequently make poor decisions. Knowing this is a highly effective tactic of our spiritual enemy, God calls us to, “Fear not.”

David was unarmed. How crazy is that? In his haste, he left without a sword or spear and was unprepared to defend himself. As a military man, this was inexcusable. What military guy goes anywhere without some weapon? Again, his fear left him vulnerable to attack.

Ephesians 6:10-18 clearly explains our spiritual warfare, our weapons, and how to use them. However, fear often keeps us from prayer, reading God’s Word, and enjoying intimacy with God. It deprives us of the very source of strength we need. We focus on the fear instead of the solution God offers. We forget God is our sovereign protector and orchestrator.

David gave himself a false sense of security. Being unarmed, he asked Ahimelech for Goliath’s sword. But what would he do with such a heavy, unwieldy weapon? He couldn’t use it and it only burdened him down. He was holding onto past victories instead of walking in new life. Yet, even holding Goliath’s huge sword in his hands didn’t jog David’s memory of that tremendous victory against a much larger foe.

Fear often makes us reach for things and people who cannot help us. Some people, habits, or items of comfort only weigh us down. Getting stuck in the past keeps us from future victories. it also blinds us to God’s supernatural separation. When God rejected King Saul as Israel’s ruler, He asked Samuel, the prophet, how long he would mourn what God had rejected [1 Samuel 16:1]. When driven by fear, we’re like a drowning person, desperately grasping anything – sometimes even something or someone God previously removed.

David fled to his enemy. His fear of Saul drove him so far, he entered a Philistine city. Whether deliberately or by mistake, he ended up in a worse situation. God had already made him victorious over this enemy, yet that’s where David went. Who in their right mind seeks refuge with their enemies? That’s like seeking safety from a would-be robber in Jack the Ripper’s house!

Fear revives acquaintances and takes us places God never intended or previously removed. Being afraid may drive us to habits or people from whom God has already freed us. This disorientation overlooks all boundaries. Sadly, the outcome places us at risk and taints God’s anointing on our lives.

David acted crazy. He finally realized where he was. He also figured out the Philistines knew who he was and that he was alone and unarmed. So what does David do? He acted like an insane man. He scrawled on the walls while drooling into his beard. What a witness for a mighty warrior of God Almighty! What a testimony for God’s appointed and anointed King of Israel!

David acted the fool to survive the environment where he never should have been. His actions, in the presence of his enemy, reflected poorly on his faith in God. Even when we realize we are not where we should be, fear motivates further poor choices. Instead of leaving immediately and returning to where we should be, we act the fool. We damage our testimony and reduce the effectiveness of our witness.

David ended up alone in a cave. Thankfully, his family and several others came to his rescue. This marked the beginning of his loyal base of support. Even in his fearful state, God supernaturally brought him four-hundred distressed, indebted, and discontented men. David eventually become the captain of this band of outcasts – who became the core of his royal army.

We often shut ourselves off in despair. Yet, God mercifully sends relief. He wastes no adverse circumstance. Sometimes, God supernaturally uses our caves to launch us toward our greater destinies. But, He only does so when we trust Him and rededicate ourselves to Him.

The Antidote for Fear

If God was a pharmacist, His prescription for fear would contain the following instructions:

God promises to keep us in perfect peace IF our minds are firmly focused on Him [Isaiah 26:3].