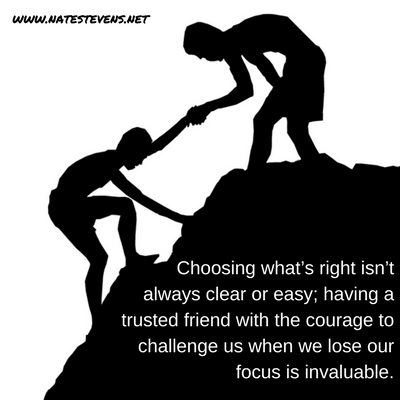 Now therefore arise, go out and speak kindly to your servants, for I swear by the LORD, if you do not go, not a man will stay with you this night, and this will be worse for you than all the evil that has come upon you from your youth until now. (2 Samuel 19:7 / ESV)

Choices are sometimes difficult. Choosing what’s right isn’t always clear or easy; having a trusted friend with the courage to challenge us when we lose our focus is invaluable.

David was caught in a dilemma. His back-stabbing enemy who usurped the kingdom’s throne away from him was dead. A cause for celebration, right? Not when the enemy was his beloved son, Absalom.

Trouble started for David with the soft spot he had in his heart for Absalom. He was a handsome man (2 Samuel 14:25) – he knew it and used it to his advantage. Absalom also had a lethal temper as is evidenced by his murder of his half-brother Amnon for raping their sister, Tamar. He subsequently fled to a foreign land where he hid for three years. When David found out, his “heart went out to Absalom” (2 Samuel 14:1), Joab, commander of David’s army and a trusted lifelong friend, made arrangements to bring him home. Yet, it was another two years before David summoned him to his presence. And when he finally did, it wasn’t to answer for his murder. It was for a warm embrace (2 Samuel 14:33). Absalom exploited David’s love for him and David failed in his responsibilities as king and father.

Shortly thereafter, Absalom led a hand-selected army to overthrow his father, the king. Subsequently, David ran for his life! In the ensuing battles, David’s forces eventually prevailed and killed Absalom. Even then, David gave strict orders not to harm him. His parental love blinded him against his duty as God’s king. This is where having a trusted and honest friend is invaluable!

Joab scolded David for his misguided sorrow toward the person who stole his throne. He reminded him of the high price of battle and his responsibility as king to his loyal subjects. This type of reprimand is best received from a trusted and accountable friend.

We all face difficult choices in life as our closeness to situations blinds us. Those are the specific times when we need trusted friends who will honestly and courageously hold us accountable. God’s word reminds us that “Iron sharpens iron, and one man sharpens another” (Proverbs 27:17).