When God Demands the Difficult 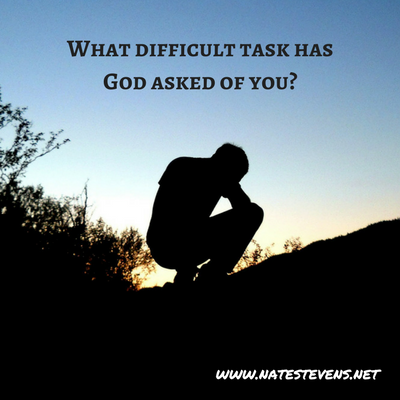 “Behold, I am the Lord, the God of all flesh. Is there anything too hard (difficult) for Me? [Jeremiah 32:27, parenthesis added]

Has God ever asked you to do something difficult? Like stepping out in faith or surrendering something precious? When confronted with such dilemmas, we face the choice of either obeying, discounting the message to align it with our preferences, or ignoring it completely. However, I have found God is not easily dismissed. He has a history of asking the difficult.

Those Who Answered the Call

After waiting years for a promised son, Abraham celebrated Isaac’s birth. Yet, God tested him to confirm he loved Him more than his precious son. “Take now your only son Isaac, whom you love, and go…offer him as a burnt offering” (Genesis 22:2). Most of us could defend the refusal to commit such a horrific request. Yet, God was unyielding. He asked the difficult to prove Himself trustworthy.

Moses was a fugitive from Egypt. There was a price on his head for murder. Yet, that is precisely where God sent him to free the enslaved Israelites. Oh, I can imagine their conversation. “God, I can’t go back there! Pharaoh has an arrest warrant out for me!” Moses faced a daunting, illogical, and seemingly futile task. Yet, God asked the difficult so He could do the impossible.

Imagine the courage and commitment necessary to spend time and energy on such a large, lengthy, and seemingly unnecessary project as building the Ark. Noah sawed, hammered, and sanded for one-hundred-and-twenty years, building something intended to float on unseen water, while being ridiculed by everyone and questioned by his family. Yet, God never wavered in His demand. He asked the difficult to punish evil while safeguarding the righteous.

God invented relationships, marriage, and the family. All are foundational to human reproduction, growth, and support. However, He gave Ezra a message that opposed all three. After discovering many Israelite men had married women from the surrounding pagan countries—some even fathering children—Ezra commanded them to get divorced, abandon their children, and purify themselves. God asked the difficult because He could not condone what He had previously forbidden.

While faithfully declaring God’s messages, God forewarned Ezekiel his wife would die that evening. “I take away from you the desire of your eyes with one stroke; yet you shall neither mourn nor weep” (Ezekiel 24:16). Though facing such heart-wrenching loss, God forbade His prophet from grieving. He could only sigh in silence and solitude. God asked the difficult as an illustration for pending judgment against His people.

“Hosea, I want you to marry a prostitute who will be unfaithful to you.” Here again, God seemingly countermanded the basis and sanctity of marriage. He asked his spokesperson to love an unfaithful prostitute to demonstrate the Israelites’ unfaithfulness to Him. Knowing his wife would stray and humiliate him, was a decision most people would avoid. God asked the difficult to woo His children and their faithful obedience.

God tasked Jonah with the message of repentance for the Assyrians who had ransacked his country, murdered women and children, and carried many into captivity. Walking into Nineveh was not only dangerous, it was repugnant. I imagine Jonah refused, “I cannot do that, God. What you are asking is loathsome and unthinkable.” God asked the difficult so He could extend His love, mercy, offer of repentance and forgiveness.

In the Garden of Gethsemane, Jesus prayed, “If it is possible, let this cup pass from Me; nevertheless, not as I will, but as You will.” Jesus knew the agony and humiliation awaiting Him. As fully man, He pleaded to be released from the task, if at all possible. Yet, as fully God, He surrendered to the difficult task of Friday’s Calvary to accomplish Sunday’s victory and salvation.

One Who Refused God’s Request

God forces Himself on no one and not everyone accepts His difficult assignments. In Luke 18:18-23, a rich young ruler came to Jesus for advice. Jesus, knowing all thoughts, intents, and motives, posed a difficult situation. “Sell all you have, distribute to the poor, and come, follow Me.” The young man left sorrowful because he refused the difficult.

Yes, God asks the difficult, not only for His sovereign design, but also to highlight areas in our lives requiring surrender to achieve His complete transformation. To refuse brings sorrow and regret. To accept, although painful, challenging, and seemingly illogical, brings satisfaction, peace, and fulfillment as He transforms us into His likeness.

What difficult task has God asked of you? How will you respond?