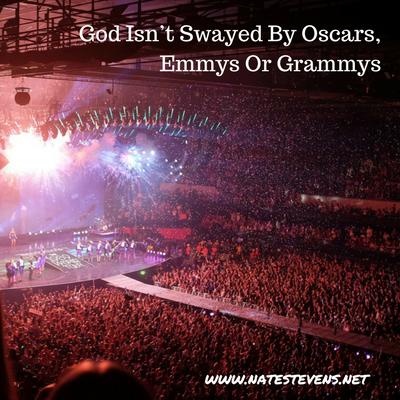 Do not love the world or anything in the world. If anyone loves the world, love for the Father is not in them.  (John 2:15)

“We’ve lost yet another star…hero…icon.”

I was in Los Angeles the day Michael Jackson died and recall how the news of his death paralyzed the city, even the nation. Then Prince died. Followed by Billy Idol. Then George Michael. Yes, then Carrie Fisher. Each time, social media exploded with comments and viewpoints about how unfair life is People sadly admitted the year had claimed too many good people, that they were too young to be taken from us. Many posted Instagram pictures with warm condolences—yes, even Christians.

As I read them, I was fascinated by the outpouring of emotions from Christians when famous actors, musicians, or entertainers die. We overlook their lifestyles, characters, and beliefs in our profuse eulogies. Of course, they lived and championed immoral lifestyles, mocked Christianity, or openly rejected religion. Yet, we parade their good qualities and relive the awards, milestones, and recognition they received in their lifetime. Then, we post their music, lyrics, or movie themes in our social media streams with beautiful “RIP” comments.

It seems as though the Oscars, Emmys, Grammy’s and other worldly awards outweigh heavenly rewards. Shiny Oscars seem to garner more attention than heaven’s “gold, silver, and precious stones” (1 Corinthians 3:12-14).

Love Not The World

Please understand, I am not being coldhearted or judgmental. Death can be a somber, tragic, irreversible event with eternal ramifications. We should mourn every person’s passing. But, we forget one important point. Ultimately, people are destined to die, then they face judgment (Hebrews 9:27). I do not know for certain the spiritual condition of the famous people who have passed on. But in Luke 6:44-45, Jesus said what’s inside a person, at their core, generally comes out. All we can observe is the “fruit” of their lives—what they said, how they acted, and what they promoted in their lifetimes.

The Apostle John tells Christians not to love the world or anything in the world. Meaning, don’t get sucked into or swept away by its cultural decay. If we do, God says His love is not in us. Instead of offering nostalgic support and warm condolences, let’s look through the eyes of our Heavenly Father. Yes, it breaks His heart when someone passes into eternity without Him. Of course, it breaks His heart when someone lives a lifestyle rampant with drug abuse, violence, and sexual immorality. Yes, it breaks His heart when I hold onto some hidden, secret sinful habit and do not repent. In addition, it saddens Him when I stunt the transformation He wants to perform in my life.

But as children of God, our affections should be on heavenly things. We are not of this world. As sheep from a different pasture, we are citizens of a different realm. We are instructed to “look at the heart,” not the outer appearance (1 Samuel 16:7). Our taste buds should desire a much more heavenly flavor, regardless of the dramatic movie, pulsing music, iconic lyrics, or earthly awards.

Instead of publicly expressing horror, grief, and heartbreak for those who lived in blatant opposition or rejection of God and His moral standards, I choose to celebrate those who honored God in their lives and lifestyles. I choose to honor the saints who, through heart wrenching adversity, stayed true to their faith in God. My deep condolences and respect is for those who, in their final moments, loved their families and said tearful goodbyes until their reunion in heaven.

If you are looking for great examples, look no further than George Beverly Shea, Joey Feek, Cliff Barrows, or Tim Lahaye. Very few people posted anything about their passing, yet they are examples of people who Christians should honor and wish them peace as they take their eternal rest in the arms of Jesus.

C’mon, church; let’s stop being swayed by the Oscars, Emmys, or Grammys. Let’s stop praising the worldly icons, those who promote sinful lifestyles, those who subtly deceive and destroy through twisted perversions and abuse, those who publicly denounce God, Jesus or anyone who believes in Him. Mourn for them, yes. Better yet, mourn their poor examples, their lack of faith in Christ, and the sinful influences they promoted.

Yes, death comes to all. Forget the Oscars and all other earthly rewards. Let’s celebrate those people of faith who lived in God’s victory, who advanced God’s kingdom. Better yet, let’s imitate them.