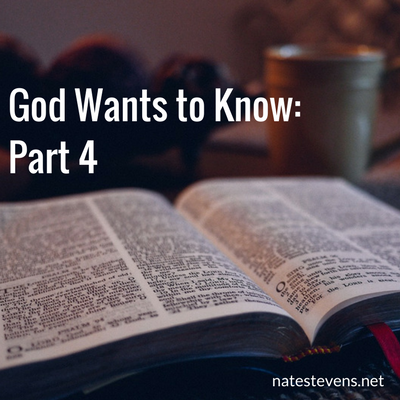 When he went in and stood before his master, Elisha asked him, “Where have you been (past history), Gehazi?” (2 Kings 5:25, parenthesis added)

Question #3 – Where Have You Been?

No matter where we go, God is there. Jonah could not outswim God. Paul ran into God on the dusty Damascus road. Even King David pondered the inescapability from God: Where can I go from your Spirit? Where can I flee from your presence? (Psalm 139:7). We cannot escape Someone who is everywhere and knows everything.

Naaman, a Syrian king, had leprosy. On the advice of hid Hebrew servant girl, he went to the prophet Elisha for healing of his deadly disease. He obeyed Elisha’s instruction to dip or wash himself seven times in the Jordan River. After he was miraculously healed, he wanted to repay Elisha. He offered several tokens of his gratitude, but Elisha refused them as he knew the healing was not something he did in his own strength. He gave God the glory and sent Naaman on his way.

But Elisha’s servant, Gehazi, had a problem with that. He thought Elisha had been too easy on Naaman and devised a plan to personally benefit from the situation. He chased after Naaman, told him a flimsy story, and returned home with two bags of silver and two new outfits. But his greed was his downfall.

Gehazi abandoned God’s place and provision to pursue his own desires. He had everything he needed in his employment with Elisha. He served, and was mentored by, one of God’s greatest prophets. Yet, he turned his back on God to chase monetary gain and fashionable clothing.

After hiding his dishonest gain in his home, he went to see Elisha like nothing had happened. He failed to realize the impossibility of running or hiding from God. Inevitably, the truth comes out. Be sure your sins will find you out (Numbers 32:23).

Elisha confronted his servant. I am sure Gehazi’s heart skipped several beats when he heard, “Where have you been?”. When we get caught doing something wrong, it scares us. Sadly, we then lie about it to cover ourselves from any potential consequences. Just like a child who lies about taking a cookie while having crumbs around his mouth and chocolate in his teeth, Gehazi denied going anywhere. Elisha responded, Did not my heart go with you?

Our Past History is Known to God

That is the way God is with us. His Spirit is everywhere and He never leaves us. The sins of our past are not hidden from Him no matter how hard we try to deny, defend, or disguise them. Ananias and Sapphira foolishly tried this and immediately died for their nonsensical attempts (Acts 5:1-11).

Thankfully, God is merciful to us even in our times of misrepresentation. Just like Gehazi, we sometimes reject where God has us or what He has given us and chase our selfish desires. Our rejections are as numerous as the distracting opportunities we encounter. This is why Paul cautions, Those who belong to Christ Jesus have crucified the flesh with its passions and desires (Galatians 5:24).

God questions us today: Where have you been? What provision of His have we ignored or rejected? Which “things” are we pursuing instead of God? What regrets or disappointments have landed in our world as a result of straying from Him? If we haven’t experienced any negative consequences yet, hang on tight. Do not be deceived: God cannot be mocked. A man reaps what he sows (Galatians 6:7). Harvest time always follows planting season – and confirms the seeds sown.

God asks, Where were you? to identify control. He asks, Where have you been? to reveal personal choice. This question is not meant to embarrass, but to confront us and prompt our return to our loving Heavenly Father. Though He already knows, He asks to stop us in our tracks and elicit our honest response and genuine return to Him.

How Will You Answer?

It is my hope and prayer that you will honestly confess where you have strayed and allow His forgiveness, love, mercy, and grace to reconcile your fellowship with Him. Besides, you have never been out of His sight or mind anyway!