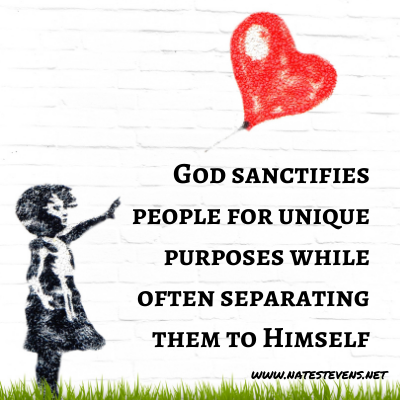 As we continue this series, let’s look at how God orchestrates His supernatural separation to sanctify people for unique life purposes. As unnatural as it may seem, He sometimes separates the best from the best.

Not all separation involves pain. Sometimes God calls individuals to be separated or sanctified to Himself. On rare occasions, people in the Bible would take a Nazarite vow as a voluntary separation to God. This meant no wine or any grape products, not shaving the head, and not touching a corpse [Numbers 6:2-8]. In essence, they “fasted” from these things, for life or a predetermined time period, to set themselves apart for God. Samson initially was a Nazarite. However, he broke all three conditions and paid dearly in the end. Scripture also hints at Samuel and John the Baptist as being Nazarites.

Actually, the Hebrew word for holy implies being set apart for God and set apart to God. It involves a separation for consecration, sanctification, and purification for His service or use. God calls us to “be holy in all your conduct, because it is written, ‘Be holy, for I am holy’” [1 Peter 1:15-16]. This means all believers should become very familiar with this concept. God expects us to separate ourselves from “all filthiness of the flesh and spirit, perfecting holiness in the fear of God” [2 Corinthians 7:1].

“Perfecting holiness” doesn’t mean we attain perfection here in this world. It reveals a two-fold process that prepares us for the world to come. We work on ourselves while the Holy Spirit transforms from within.

This is what we do while allowing God’s Spirit to transform us “until Christ is formed in you” [Galatians 4:19]. Oh, blessed day when we awake face-to-face with Jesus and find ourselves in His likeness! [Psalm 17:15].

Separating the Best from the Best

Although God often separates the bad from the good and the good from the best, there are times when He separates the best from the best. Sometimes His “chariot and horses of fire” separate what seems inseparable so He can perform greater things. The story of Elijah and Elisha illustrates this vividly.

Then it happened, as they continued on and talked, that suddenly a chariot of fire appeared with horses of fire, and separated the two of them [2 Kings 2:11].

Ever since Elijah anointed Elisha as his successor and began mentoring him, they were inseparable [2 Kings 2:1-6]. When Elijah knew their time together was drawing to a close, he asked Elisha to stay behind. Of course, Elisha refused.

But separation became necessary because God planned to take Elijah where Elisha could not go. So, God sent His chariot and horses of fire. Without doing so, Elisha risked being whisked away in the whirlwind meant only for Elijah. God’s fire of separation accomplished several things. It:

Yes, Elisha grieved the loss of his mentor and friend. However, he did not let separation anxiety keep him from his purpose. He picked up Elijah’s fallen mantle. Then, he revisited the scene of God’s fire falling from heaven on Mount Carmel. Ultimately, he fulfilled a ministry that included twice as many miracles as Elijah.

If God has already separated, or is in the process of separating, something from your life, first identify whether it is the removal of the bad from the good or even the good from the best. If that is the case, thank God for His holy purification process. However, if it is a separation of the best from the best, trust God to sovereignly orchestrate all the details according to a purpose only He may ever know. Then begin to walk in His new “fire separated” purpose.

Let’s look next at separation in friendships, relationships, and associations….

(Click here for Part 1 or Part 3 of this series)