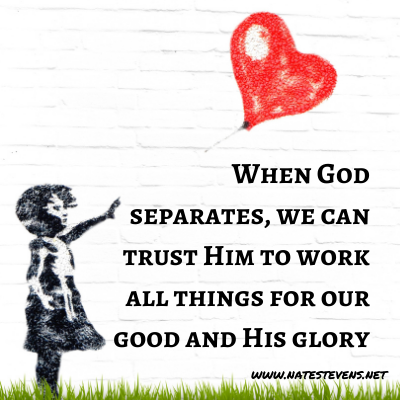 Knowing God works all things for our good and His glory, may we trust His separation. May we rely fully on his orchestration in our associations, friendships, and relationships.

When God initiates the separation, He expects us to follow through. He takes a dim view of disobedience or even partial obedience. He made that perfectly clear to the Israelites in His instruction for them as they took ownership of the Promised Land.

In hindsight, the Israelites failed in their mission. Not only did they fail to “drive out” or separate themselves from the Canaanites, they intermingled with them, intermarried with them, and interacted with them. They accepted and adopted their lifestyles, idols, and practices. In essence, they became enamored with the very thing God intended for separation. And, in judgment, God did just as He said He would. Their disobedience reverberates down the ages through today. Constant hostilities, hatred, battles, animosity—all unnecessary, if they had only obeyed God’s call for complete separation.

God separates for a reason. In this case, He knew the immorality and idolatry of the Canaanites. He previously had cursed them as far back as their forefather, Ham [Genesis 9:20-25]. In His omniscience, God foresaw the rebellion of future generations and warned the Israelites to eradicate their perversion. Israel’s disobedience, and subsequent association with the Canaanites, proved God to be correct.

No matter the attraction, the seemingly harmless interaction, or our personal desires, we must always trust God’s guidance and follow His separation.

“How long will you mourn what God has rejected?” This was what God asked His prophet Samuel in response to his prolonged sadness over God’s rejection of Saul as king over Israel [1 Samuel 16:1]. As a test of obedience, God previously told Saul to “utterly destroy” the Amalekites [1 Samuel 15]. God had His reasons; Saul knew what God expected.

However, Saul started thinking and looking around. Any time we question God’s Word and look around at what’s appealing instead of trusting God and obeying His Word, we’re headed for disaster. Saul destroyed what was “despised and worthless” but kept “the best of the animals.” However, partial obedience is still disobedience—and requires God’s judgment. This is why God questioned Samuel about his prolonged mourning over Saul being rejected as king.

Apparently, God’s rejection hit Samuel hard. He had anointed Saul as king and undoubtedly been his counselor for years. Quite possibly, they kindled a close friendship. But Saul rebelled against God and God already rendered His judgment. Saul would no longer be king. It was time for Samuel to move on.

As Samuel went about his search for a new king, God directed him to the household of a man named Jesse. In looking at each of Jesse’s sons, Samuel apparently looked for an exact replica of Saul. Yet, God refused each one until David was selected [1 Samuel 16:7-10].

See, God does not choose as we do. While we look at the outer appearance, qualifications, and potential, God looks at the heart. He works toward His ultimate purpose and how we each fit into His plan. When we attempt to hold on to or replace what has been separated, God rejects and refuses. We are wise to trust, accept, and follow Him. Before He asks, may we stop mourning the disobedient, disqualified Saul and move on to the appointed, anointed David.

God also instructs us about our relationships—personal, romantic, and business.

“Do not be unequally yoked together with unbelievers.
For what fellowship has righteousness with lawlessness?
And what communion has light with darkness?
And what accord has Christ with Belial?
Or what part has a believer with an unbeliever?
And what agreement has the temple of God with idols?
For you are the temple of the living God.” [2 Corinthians 6:14-16]

Knowing our stubbornness and justifications for less-than-ideal choices, God gives five rapid-fire examples of intended separation. Some things simply do not go together. To continue trying to force-fit them is foolish—and dangerous. Why would we proceed when God clearly says, “No”?

As one final confirmation of God’s supernatural separation, we find another story of King David in 1 Samuel 29. In running from murderous King Saul, David sought sanctuary with the Philistines. Yes, the same group who hailed Goliath as their champion against the Israelites—who David killed. Yet, here David was, living with his enemies for a year and four months.

As they prepared for war against another group of people, the Philistines rejected David from among them. Similarly, the world eventually shuns true believers. God sovereignly orchestrated the separation from where David had no business being. He forgot who he was, his past anointing, and his future promise of the throne in Israel. He also forgot that provision and protection come from God alone. But, oh, how like David we are. When will we learn that the world is no place for us?

Fear and forgetfulness make us do some strange things. Thankfully, God patiently and sovereignly coordinates all things to prompt us back on the right path.

Now, let’s look at God’s call for separation from sin, the world, and the things of the world….

(Click here for Part 2 and Part 4 of this series)