God’s Supernatural Separation – From the World 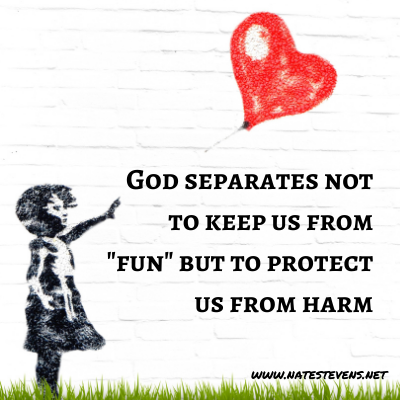 Understandably, God’s separation calls us away from sin, the world, and the “things” of the world. This isn’t because He wants to keep us from “fun.” Rather, He is protecting us from harm.

Separation from Sin, the World, and Things of the World

God has a reason for His separation from sin. Apart from its enslaving, weakening, immoral effects, we don’t want to be near when God’s judgment falls. An example involves Korah, Dathan, and Abiram when they challenged Moses’ authority and rebelled against his direction. As God’s appointed man, their rebellion was a slap in God’s face.

So the Lord spoke to Moses, saying, “Speak to the congregation, saying, ‘Get away from the tents of Korah, Dathan, and Abiram.’” Then Moses rose and went to Dathan and Abiram, and the elders of Israel followed him. And he spoke to the congregation, saying, “Depart now from the tents of these wicked men! Touch nothing of theirs, lest you be consumed in all their sins.” [Numbers 16:23-26]

Remaining defiant and rebellious to the bitter end, they came under God’s direct and immediate judgment.

Now it came to pass, as he finished speaking all these words, that the ground split apart under them, and the earth opened its mouth and swallowed them up, with their households and all the men with Korah, with all their goods. So they and all those with them went down alive into the pit; the earth closed over them, and they perished from among the assembly. [Numbers 16:31-33]

The reason too many believers are scorched by God’s judgment is because they’re standing too close to the fire. God’s separation isn’t punitive. It is for our overall good—both in this world and the next. He knows the nastiness of sin and wants to protect us from its devastating, putrefying, enslaving, and weakening effects.

Various Scripture verses instruct us why we must separate ourselves from the world.

In view of this divine perspective, a believer continuing to love the world is similar to us watching someone slamming their head against a brick wall. We would ask, “Why would he continue doing something that hurts and is against something that will never soften or yield?” God asks the same of us when we constantly run to or associate with a world that will only hurt us and will never soften or yield in its stance. The two run totally separate from each other and will never align.

If we need further motivation to separate ourselves from any affection or attraction for the world, may we always remember the treatment our Savior received at its hands.

And yet – “outside the camp” – ‘twas there my Saviour died!
It was the world that cast Him forth and saw Him crucified.
Can I take part with those who nailed Him to the tree?
And where His name is never praised, is there the place for me?
Nay, world! I turn away, tho’ thou seem fair and good;
That friendly, outstretched hand of thine is stained with Jesus’ blood.[i]

From Things of the World

Even the “things” of the world prevent us from God’s best. Jesus warned, “Take heed to yourselves, lest your hearts be weighed down with…cares of this life, and that Day come on you unexpectedly” [Luke 21:34]. In essence, He knew the distracting call of the things of this life to the point they could pull our attention away from the day of His return. Can you imagine getting so tied up in this world’s trinkets that we are unprepared for or unaware of His coming? So a separation, even if it is the severing of an emotional attachment, may be necessary.

Material things are not necessarily bad, in and of themselves. We all have need of certain things to conduct life as we know it. However, they become hindrances when our desires, priorities, and attention for them pull us away from what should be our primary concern—the return of our Lord!

When Jesus responded to an affluent ruler who asked what he must do to inherit eternal life, He addressed the devastating influence of materialism. After initially stating the obvious commands, and hearing the ruler’s response that he had already done all that, Jesus went to the heart of the matter.

Sell all that you have and distribute to the poor, and you will have treasure in heaven; and come, follow Me. [Luke 18:22]

Sadly, the ruler left “very sorrowful” because his heart was tied up in his wealth. Rather than sacrifice it all and follow Jesus, he decided the cost was too much. When we have similar attraction and undisciplined affection for our “things,” separation is necessary to free us from the things that bind and distract. Anything desired or prioritized over Jesus is suspect.

Now let’s look at how God separates in employment, careers, and ministry….

(Click here for Part 3 and Part 5 of this series)