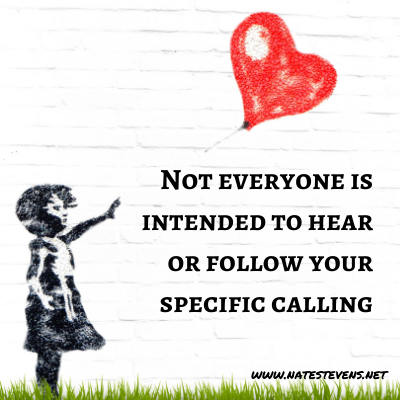 Purpose – Not Everyone Makes the Same Journey

Not everyone is intended to hear or follow your calling. God may need to remove certain people or aspects of your life to speak directly and only to you.

As they were going down to the outskirts of the city, Samuel said to Saul, “Tell the servant to go on ahead of us.” And he went on. “But you stand here awhile, that I may announce to you the word of God” [1 Samuel 9:27].

We have a tendency to want to bring people along with us to make the journey more comfortable or assured. However, God may have other plans for them. His personal call is only for you. It is fine to share the good news with others but completely unwise to invite them along. They may slow you down or distract your progress. The story of Abraham is a fitting example.

God told Abraham, “Get out of your country, from your family and from your father’s house” [Genesis 12:1]. God had specific plans for him that affected where he lived, who he left behind, and who he took along on the journey. It was an individual call with specific blessings.

I will make you a great nation; I will bless you and make your name great; and you shall be a blessing. I will bless those who bless you, and I will curse him who curses you; and in you all the families of the earth shall be blessed. [Genesis 12:2-3]

Abraham did leave his country; but he took along his father-in-law, Terah [Genesis 11:31], and his nephew, Lot [Genesis 12:4].That directly conflicted with what God said. God wanted Abraham completely separated from his old life before giving him the new. His partial obedience resulted in a delayed journey and delayed covenant promise.

Abraham’s caravan made it to Haran, about halfway to the land God promised. There they came to a halt. It wasn’t until Terah’s death, about twenty-five years later, that the journey continued. As those wasted years slipped by, Abraham’s purpose lay dormant.

And yet, as they eventually got closer to the Promised Land, Lot was still among them. And we find there was growing strife between Abraham’s shepherds and Lot’s shepherds. So, Abraham decided to resolve the conflict through voluntary separation.

“Please let there be no strife between you and me, and between my herdsmen and your herdsmen; for we are brethren. Is not the whole land before you? Please separate from me. If you take the left, then I will go to the right; or, if you go to the right, then I will go to the left.” And Lot lifted his eyes and saw all the plain of Jordan, that it was well watered everywhere (before the Lord destroyed Sodom and Gomorrah) like the garden of the Lord, like the land of Egypt as you go toward Zoar. Then Lot chose for himself all the plain of Jordan, and Lot journeyed east. And they separated from each other. [Genesis 13:7-11]

Even though they finally separated, Lot still was a thorn in Abraham’s side. Living so close to the wicked, perverse cities involved severe risk. Abraham could have turned his back on Lot and gone his way. However, in his loyalty to family, he was still distracted from God’s fullest purpose for his life. First, he fought a great battle to rescue Lot and his entire estate from five renegade kings [Genesis 14:1-16]. Then, he interceded with God for Lot and his family before God rained down judgment on Sodom and Gomorrah [Genesis 19:1-29].

How much easier the journey would have been had Abraham trusted and obeyed God fully. He should have left all family members back in his home country. Having done so, he would have arrived at his destiny sooner. He would have enabled an undistracted, deliberate purpose. And he would have possessed his covenant promise with less conflicts. Yet, through it all, God remained faithful and patient and ultimately blessed Abraham.

Now let’s look at the finality of eternal separation…

(Click here for Part 5 or Part 7 of this series)