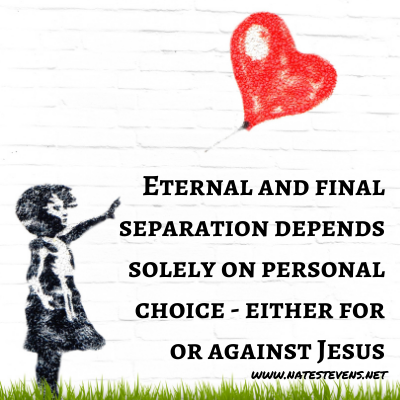 Of all the earthly separations, none are as drastic as the final and eternal separation. This event demands our full attention and priority.

The final two separations are not voluntary. First, death comes to all and separates us from this earthly realm. Secondly, “It is appointed for men to die once, but after this the judgment” [Hebrews 9:27]. Eternal judgment follows earthly death. Immediately after our earthly departure, we all face yet one more separation. Two separate eternal destinations await us depending on whether or not we have accepted Jesus Christ as personal Lord and Savior.

For believers, Paul confirms we will be instantly ushered into God’s presence. “We are fully confident, and we would rather be away from these earthly bodies, for then we will be at home with the Lord” [2 Corinthians 5:8]. Our earthly lives will be over, the journey just begun. Hallelujah! “We shall be like Him, for we shall see Him as He is” [1 John 3:2].

Some believers may still be alive at the Lord’s return (also known as the Rapture). Though death isn’t the gateway, they will still be ushered into His presence. Paul described that event.

For the Lord Himself will descend from heaven with a shout, with the voice of an archangel, and with the trumpet of God. And the dead in Christ will rise first. Then we who are alive and remain shall be caught up together with them in the clouds to meet the Lord in the air. And thus we shall always be with the Lord. [1 Thessalonians 4:16-17]

This event is imminent. Jesus Himself said He was returning soon [Revelation 22:20]. Oh, how His followers long to hear Him say, “Well done, good and faithful servant… Enter into the joy of your lord” [Matthew 25:21].

But for those who have not placed their faith in Jesus Christ, a very different reality awaits. An impassable “great gulf” separates believers from unbelievers [Luke 16:26]. By rejecting Christ as personal Savior and Lord, unbelievers seal their doom. John, the revelator, explained the process that ushers the lost to their horrible fate.

And I saw a great white throne and the one sitting on it… I saw the dead, both great and small, standing before God’s throne. And the books were opened, including the Book of Life. The dead were judged according to what they had done, as recorded in the books… Then death and the grave were thrown into the lake of fire. This lake of fire is the second death. And anyone whose name was not found recorded in the Book of Life was thrown into the lake of fire. [Revelation 20:11-15]

God never intended for anyone to end up in hell. Actually, He prepared hell for the devil and his fallen angels [Matthew 25:41]. How dreadful for any human to end up there! For this reason, God sent His Son, Jesus, to give His life for us [John 3:16]. Only through Jesus can we have eternal life in heaven [John 14:6]. He is the only way to avoid an eternity in hell.

It All Depends on Individual Choice

What a devastating, horrific, eternal, and final separation that will be. And one that is completely avoidable. Eternity’s final destinations hinge on each person’s freewill choice—to choose Jesus (and have their names written in the Book of Life) or to choose against Jesus. It’s that simple. Jesus did everything He could to make it possible for us to join Him in heaven and avoid hell. He can do no more. Yet, He respects and accommodates those who choose against Him. He loves everyone, yet coerces no one. By their own choice, unbelievers will be separated eternally from Him, from believing friends and family, and from everything good. This will be the final and eternal separation.

If each person could but once peer over the steep sides of that burning lake. Seeing and hearing those tormented souls alive forevermore in everlasting flame, they would run into the Savior’s embrace. Fortunately, each person can and should avoid this separation at all costs! I urge all unbelievers to accept Jesus Christ as personal Lord and Savior.

Thankfully, there is ONE EXCEPTION to God’s separation. Let’s explore that next…

(Click here for Part 6 or Part 8 of this series)