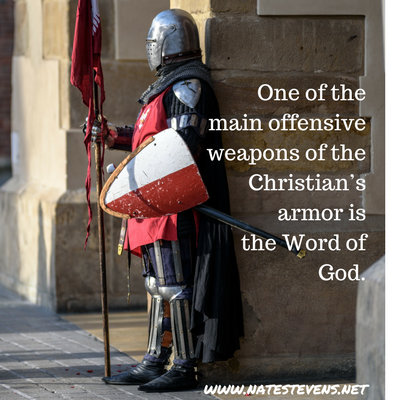 There’s a battle raging at this very moment. Though you may not recognize or admit it, you are right in the middle of it. This battle’s origin is from eternity past, but its finale is fast approaching.

It isn’t a visible, physical battle of human flesh, blood, and smart bombs; rather, it’s a spiritual war against the powers of this dark world and against the spiritual forces of evil in the heavenly realms (Ephesians 6:12). The target of this cosmic conflict is the control over your freewill and mine – our desires, priorities, passions, purposes and eternal destinations. And even though we may know and talk about this war, most of us are sorely unprepared for it. We lack the power to fight effectively because we are unarmed.

The story of King Saul in the Old Testament outlines his ongoing war with his primary enemy, the Philistines. As he gathered his people for one battle, there is this interesting side note:

Not a blacksmith could be found in the whole land of Israel, because the Philistines had said, “Otherwise the Hebrews will make swords or spears!” So all Israel went down to the Philistines to have their plow points, mattocks, axes and sickles sharpened. So on the day of the battle not a soldier with Saul and Jonathan had a sword or spear in his hand (1 Samuel 13:19-20, 22).

How crazy is that! Not only were they going into battle unarmed, they hadn’t noticed there were no blacksmiths to even make weapons! They were unprepared, clueless about how helpless they were, and dependent on the very enemy they were trying to fight.

Sadly, I believe this story reveals the condition of the spiritual battle that rages today. As warriors, we may have the desire to fight against our dark enemy; but for the most part we seem to lack any real power. We remain unarmed, unprepared, clueless about our situation, and dependent on the very things against which we should be fighting.

One of the main offensive weapons of the Christian’s armor is the sword of the Spirit, which is the word of God. It is what empowers us. Without a firm grasp on this weapon, we risk becoming a casualty in the spiritual warfare swirling around us.

Even Jesus, when tempted by Satan in the wilderness, used God’s Word. He repeatedly said, “It is written,” then quoted Scripture to defeat His enemy. The New Testament writer, James, adds his insight: “Submit yourselves, then, to God. Resist the devil, and he will flee from you. Come near to God and he will come near to you” (James 4:7-8).

So, what’s your battle plan? Do you want to win or will you continue struggling in constant defeat with no power against Satan’s strategic attacks? Will you live each day with sword in hand or are you still looking for a blacksmith?

Father God, please fill me with Yourself as I empty myself of everything that hinders my spiritual battle. Grant me a passionate hunger and thirst for Your righteousness. Guide me as I skillfully arm myself with the weapon of Your Word. Help me, above all, to be a worthy warrior who fights courageously and honorably for Your Kingdom. I accept Your strategy and submit my will to Yours. Help me to fight until I hear You say, “Well done, My child.” I pray this in Jesus’ name, Amen.