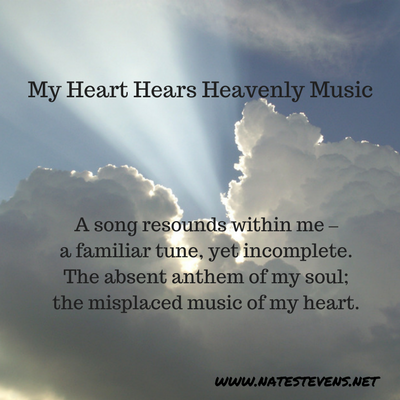 A song resounds within me – a familiar tune, yet incomplete.
The absent anthem of my soul; the misplaced music of my heart.
Infused before time began, its melody beckons with angelic whispers;
Awakening with midnight call, arousing my senses with its lingering refrain.
In quiet moments, with eyes closed, I faintly see the notes suspended in the air I breathe;
Occasionally I hear its fleeting echoes softly summoning my spirit’s deepest desire.

Though tempted to quench my melodic thirst with earth’s brief and empty sounds,
This world’s dissonance evades the truest pitch and fullest chord – and the song slowly fades.
The hallowed sound is out of rhythm with the world’s staccato beat and frantic sway,
Yet attempts are made to capture this song through touching ballad, worship, and praise;
Inspired poets and musicians closely imitate it with sacred song and soulful sonnet.

Still I await that moment when the distant echoes and intermittent sounds
Are composed into that one transcendent, majestic, soul-satisfying anthem.
It’s the song the angels cannot sing – the song of all songs, the song of the Redeemed;
A new song whose music has not yet been fully composed nor its lyrics clearly known.

But, when gathered into the presence of the Master Musician – and the music swells,
I’ll recognize it as an old familiar tune that ran through my subconscious mind for years.
With smiling face, my weary heart will rest in the stirring yet serene sound
Gently gliding through time and space to yield the final resolution to every chord known to man.
Swept away within the heavenly crescendo, I’ll close my eyes, lift my hands, and rejoice
As I blend my voice with that cosmic choir – becoming part of the music I was born to hear and sing.

I will finally be home – and my heart will be at rest…..with its heavenly song.