How the Shadow of the Cross Impacts the World 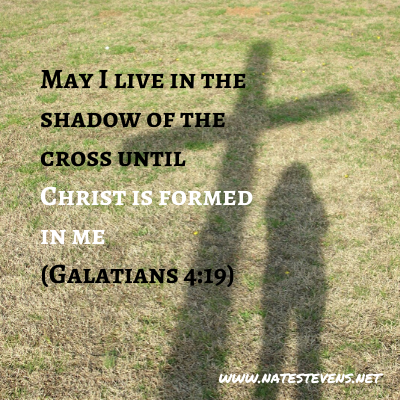 Those who live in the shelter of the Most High will find rest in the shadow of the Almighty. [Psalm 91:1, NLT]

Shadows can be creepy or restful places. Dark shadowy corners in a dusty basement conjure up childhood fears. Yet, the shadowy shade of a tree on a hot day provides relief from the sun’s rays.

But can God cast a shadow?

John 4:24 tells us God is Spirit. Last time I checked, spirit beings do not cast shadows. So, what type of shadow does God cast?

Living Under The Shadow

On this Good Friday, we are reminded of the primary shadow God cast on this earth. The shadow of the Cross of Calvary. On this cross, the Son of God gave His life as a sacrifice to reconcile us back to God. Anyone who comes to Jesus and accepts Him as Savior and Lord [Romans 10:9-10], rests in the “shadow of the Almighty.” They no longer face the wrath of God, but find shelter in the sacrificial death of Jesus Christ.

By coming to Christ in simple faith, accepting who He is, and claiming His finished work on Calvary, I am regenerated. Or as Jesus said, I am “born from above” [John 3:3-7]. A spiritual transformation occurs whereby God regenerates my spirit and indwells me with His Spirit. As such, I am sheltered by the Most High God and live under the shadow of His protection and provision. I am eternally safe.

Once I am living under the shadow of the Almighty God, another question arises. What type of shadow am I casting?

Jesus said, “If anyone desires to come after Me, let him deny himself, and take up his cross daily, and follow Me” [Luke 9:23].

When the Roman soldiers led Jesus to the site of His crucifixion, as was the custom of that day, they made Him carry His own cross. This practice signified the guilt and shame connecting a condemned man with his crime. Yet, as Jesus struggled due to fatigue, blood loss, and shock from a prolonged, brutal assault, the Romans compelled Simon the Cyrene to carry the cross for Him.

Imagine the shame of being identified with someone else’s crime. Each step Simon took brought him in view of those along the pathway who identified him with the condemned man. The shadow of the cross he carried fell across both him and Jesus.

So, when Jesus instructed His followers to take up the cross, He implied there must be evidence of our relationship or connection with Him. The shadow I cast must be that of His cross. By carrying it daily, I demonstrate to everyone along my life’s journey my identification with Him, my association with His sacrificial death, and my devotion to Him. It becomes the evidence of my relationship with Him.

Bearing and Sharing the Shadow

By carrying the cross and casting its shadow, a supernatural transformation takes place within me. As John the Baptist said when referring to Jesus, “He must increase, but I must decrease” [John 3:30]. My natural shadow, outlining the shape of my image, slowly changes “until Christ is formed in me” [Galatians 4:19]. The shadow I cast is no longer mine but that of the cross.

Each and every day, as I willfully die to self and take up His cross, my shadow deepens. Quite possibly, it will fall across someone else who is seeking shelter in the shadow of the Almighty. It may be the invitation to a life-changing event whereby that person also comes to Christ in faith – and becomes a fellow cross-bearer.

Hallelujah, what a Savior!