How to Guard the Gate of Your Life 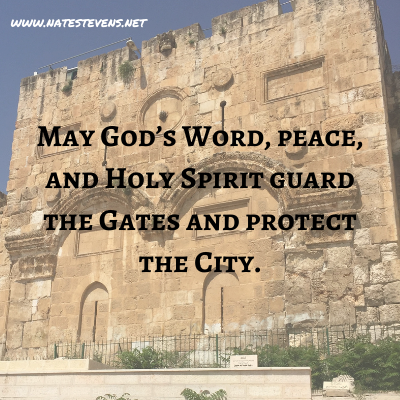 In that day the LORD of hosts will be…strength to those who turn back the battle at the gate [Isaiah 28:5-6].

If your life was a city, how aggressively would you guard or defend your gate?

Much has been said in recent years about the safety of our nation and how we should or should not protect our borders. Building the border wall between the U.S. and Mexico draws an enormous amount of “energy” both for and against. Regardless of viewpoint, one thing stands true – without a strong, impenetrable “wall” and fortified gates, anything and everything will gain entry. Both good and bad.

In Biblical times, cities were fortified with high, thick walls. The “old city” walls of Jerusalem still stand today as a testament of their strength and durability. Greek historian, Herodotus, wrote that the walls of the city of Babylon were so thick that chariot races were held on top of them.

Yes, both cities were conquered with most of the walls broken down. Lengthy siege warfare with constant bombardments, ramparts, and tunneling efforts all were used effectively by enemies. But the fact remains that the leaders and citizens of those cities valued their safety and security enough to invest considerable time, effort, and money into building such formidable walls.

However, each city had a vulnerable point. Their gates.

The gates of ancient cities were where leaders and business people gathered. Legal decisions, judgments, business transactions, betrothals, sharing of news – all happened at the city gates. It was also where people gained access to the city. So, they needed special attention, higher alertness, and additional strength.

I suspect there were armed guards or sentries around the gates. Undoubtedly, they questioned or refused entry to suspicious looking characters or those who had no business being there. As part of the everyday safety protocols, they couldn’t be too careful about who they let in.

We Are Cities with Gates

There is beauty and wisdom in something so seemingly insignificant as a city gate. Scripture overflows with references showing how the city symbolizes each person and the gate is the point of entry. For something or someone to gain access to you, it must first pass through a gate. And you have authority to allow or reject it.

For instance, when Scriptures warns, “Keep (guard) your heart with all diligence, for out of it spring the issues of life [Proverbs 4:23, parenthesis added], it means we must strategically protect our hearts and minds. Jesus said, “A good man out of the good treasure of his heart brings forth good; and an evil man out of the evil treasure of his heart brings forth evil. For out of the abundance of the heart his mouth speaks” [Luke 6:45]. In today’s language, that means, “Garbage in, garbage out.” If you don’t want your city polluted, stand at the gate and reject all polluters and pollutants.

Jesus also elaborated on the importance of guarding the gate.

Why Guard the Gates?

Aside from actually hacking off body parts, we can strategically and forcefully guard our gates. Nothing should gain entry that doesn’t align with Scripture or conflicts with the Holy Spirit’s conviction.

It would be much easier if we only had one gate; however, we have several primary access “gates” where we need to defend against “enemies.”

This includes what we choose to look at. King David fell into adultery and murder by looking on Bathsheba while she bathed [2 Samuel 11:2].  Job “made a covenant” with his eyes about not looking at certain things [Job 31:1]. Solomon wisely cautioned against being caught off guard by beauty [Proverbs 6:25].

The human eye is a vulnerable gate that needs strategic and forceful protection. This brings to question the movies we watch, books we read, websites we visit, social media streams we follow… Are we guarding the Eye Gate?

Then there is the gate of what we hear. One lesson I’ve learned: I don’t have to talk with or listen to everyone. I can be selective. Just ask Eve. She didn’t need to engage in conversation with the serpent in the Garden of Eden [Genesis 3:1-6]. She listened to its evil whisper and fell into temptation.

Then ask King Hezekiah. When the Assyrians came against Jerusalem, their evil leaders tried persuading the people of Jerusalem to surrender without a fight and not believe God would defend them [2 Kings 18:28-35]. Thankfully, Hezekiah led the people in prayer for God’s assistance – and the angel of God killed 185,000 Assyrians in one night!

To whom or what are we listening? The world’s agenda? Wishy-washy politicians? Fickle friends? How well are we guarding our Ear Gate?

Both eyes and ears lead to an inner gate called the Mind Gate. What we see and hear stands knocking at our Mind Gate seeking entrance. Here is where we need extra precaution – someone or something harmful may have inadvertently slipped passed the Eye and Ear Gates. Even our thoughts can become destructive enemies. For this reason, God warns us to forcefully bring “every thought into captivity to the obedience of Christ” [2 Corinthians 10:5]. Many spiritual battles have been lost due to unfettered thoughts being allowed to roam free in our minds. How well are we guarding our Mind Gate?

But there are other, hidden gates. What about the Feelings Gate? Or the Secret Sin Gate? The Unsurrendered Area Gate?

Praise God, we do not have to fight these attacks in our own strength! It is comforting to know “the peace of God, which surpasses all understanding, will guard your hearts and minds through Christ Jesus” [Philippians 4:7]. His peace, if we allow it, stands as a firm sentry at the gate of the mind, alerting us to the pending danger. When something upsets the peace of mind God gives, that is the warning system alerting us of a thought gone rogue. We have to “let the peace of God rule” in our hearts [Colossians 3:15]. This means not resisting, justifying, or excusing any warnings. Classic responses to potential breaches include:

The warfare is real; the assaults are relentless. The enemy is ferociously subtle so we must always be on guard. To live victorious, God-pleasing lives, we must do all we can to protect and defend the gates to our inner beings. Additionally, we must “put on the whole armor of God…” having done all to stand firm and faithful [Ephesians 6:10-18].

The enemy is at the gates. May we allow God’s Word, His peace, and the Holy Spirit to help us guard the gates and protect the city.