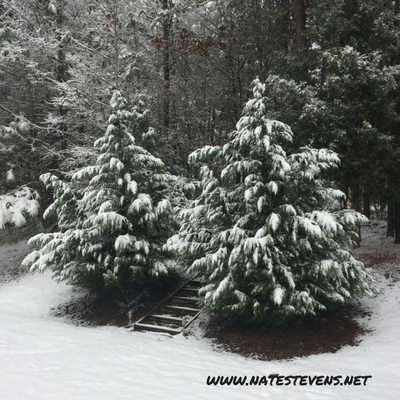 The power of thunderstorms thrills me, but snow storms are my favorite.

My northern friends may not understand my affection for snow and may claim I only like it because I live in the South and seldom get so much that I would eventually hate it. However, I was raised in the northwestern corner of Washington State. The winters I recall, from memories as well as pictures, involved snowbanks drifting up to the eves of the house. Several times, we would lift the garage door and have to shovel out just to leave the house.

So, I celebrated the recent “blizzard” of 2018 that yielded an almost unbearable (input sarcasm here) three inches of the divine white stuff. For some reason, I enjoy watching and listening to snow fall. Nature holds its breath as the landscape snuggles up in a fresh, pure, white blanket. Last night, I stood outside and marveled at the silence—as if the snow covering magically muffles the usual humdrum of life.

The Warmer the Light, The Quicker the Thaw

Then this morning, with the sun out, the sky clear and blue, I watched as melting snow fell from the trees. The sun’s heat and radiance inevitably melted away all traces of snow and ice.

In that moment, God whispered, “This is why I want My light to shine through you. The pure heat and radiance of My love, My grace, and My presence can thaw the coldest hearts.”

The sun did not announce its melting power to the snow nor did it need to explain its heat. It just shined and the heat worked its power. In like manner, I do not need to announce to the lost and wounded that I have the indwelt heat and power to thaw and heal their cold or wounded hearts. I simply need to exhibit Christ’s likeness, share what He has done in and for me, and let His light shine through me. Therein lies the sole power to melt sin’s icy grip and cold covering.

The more genuine my light and the more faithful my witness, the more equipped I will be to minister to others.