Not Everyone You Listen to is a Friend 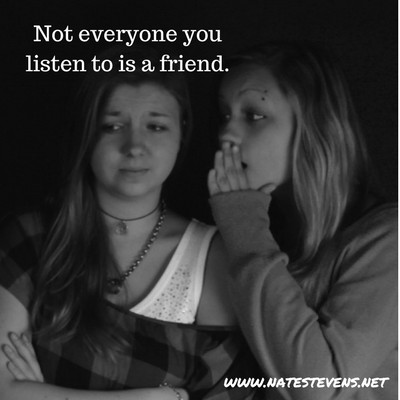 One of life’s toughest lessons to learn is that not everyone is your friend. Often, life’s deepest betrayals come from co-called “friends.”

Now when the adversaries of Judah and Benjamin heard that the descendants of the captivity were building the temple of the Lord God of Israel, they came…and said to them, “Let us build with you, for we seek your God as you do.” But Zerubbabel and Jeshua…said to them, “You may do nothing with us to build a house for our God; but we alone will build to the Lord God of Israel.” Then the people of the land tried to discourage the people of Judah. They troubled them in building, and hired counselors against them to frustrate their purpose… (Ezra 4:1-5 / NKJV)

This historical story by the prophet Ezra confirms the depth of applicability the Word of God holds. In this Old Testament setting, we find a wealth of relationship information to pass along to our children. Only God can use a minor OT prophet to reveal something so relevant today. Relational discretion, whether in friendships or dating relationships, is something every parent must pass along to his or her child(ren).

The story begins with the Jews enslaved in Babylon under King Cyrus. They had previously forsaken God, started worshipping the false gods of their heathen neighbors, incurred God’s anger, and were subsequently marched to Babylon in chains. Fast forward a few years and God softened the heart of the foreign king to allow His children to return to Jerusalem to rebuild what had been destroyed.

Please notice that the returning Jews were the “descendants of the captivity.” They were the next generation, the children of their ancestors who were carried away into captivity. Their parents must have raised and trained them regarding their heritage as many of them accepted the king’s offer to return to their homeland to begin the rebuilding process. Additionally, their parents instilled the spiritual insight and strength that motivated them to forsake the comforts of home and routine and accept the rigors of a long journey coupled with the pioneering effort to rebuild their temple.

Wouldn’t you know it – once they arrived and started doing God’s work, adversaries started showing up. As a parallel application, once we begin serving God in some capacity, our adversary, the devil, shows up. He won’t stand idly by while God’s children begin reclaiming lost ground of His kingdom. Picture this – a football player doesn’t get tackled while on the sidelines. But once he gets in the game, he becomes a target of the opposing team. Similarly, the “opposing team” of our spiritual adversary shows up to target our children to distract or discourage them from God’s purpose.

In this story we also see the deception of an unequal yoke. These heathen neighbors presented themselves as something they were not. “We want to help you!” they claimed. “We seek your God just like you do!” Isn’t it interesting that they identified Him as “your God” instead of “our God”? It is extremely important that our children understand not everyone who enters their lives claiming to be Christians are indeed what they claim. Discretion demands that we teach them to look at the “fruit” of the behaviors and lifestyles of those who want to enter their lives. This underscores the reason why God warns against being unequally yoked with unbelievers. They’re not pulling the same weight, don’t have the same motives, and aren’t headed in the same direction.

But didn’t the initial offer sound great? Why would we ever refuse someone’s offer to help us in our endeavors? Surely, as Christians, we can partner with them and help lead them to God, right? Although the Great Commission is our priority to advance God’s kingdom, when we blur the lines with the emotional attachments of a personal relationship, usually the motives and outcomes are suspect.

When the Jews responded with a quick “No, thank you,” that’s when the adversaries’ true colors appeared. If someone responds to a refusal with disappointed acceptance and respect, their motives may have been honorable. However, when the response turns ugly, it confirms a dishonorable, or at the very least questionable, intent. The story reveals that these meddling neighbors only wanted to discourage, sabotage and frustrate the work effort. They didn’t want the temple or city of Jerusalem rebuilt because they knew from past history how God blessed the Jews and fought on their behalf as they subdued their surrounding enemies.

As Christian parents, it is important that our children firmly understand some critical life lessons:

As you teach your children about relational discretion, use Scripture as well as your parental experience (Ephesians 6:4). Be diligent about pouring both into your children. Share a little each day and then model consistent behavior. In so doing, they can confirm that what is taught is lived and will be better equipped to avoid the wrong people while standing firm in their own spiritual battles.