Obedience No Matter the Circumstances 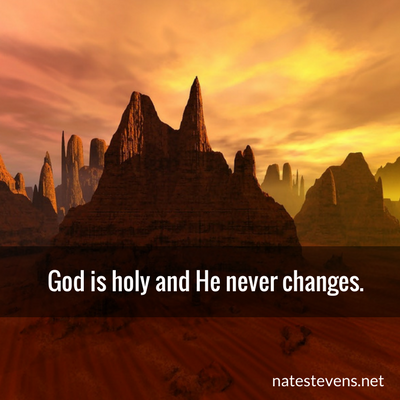 The LORD said to Moses, ‘Go up into this mountain…and see the land that I have given to the people of Israel. When you have seen it, you also shall be gathered to your people…because you rebelled against my word…when the congregation quarreled, failing to uphold me as holy at the waters before their eyes.” (Numbers 27:12-14, ESV)

God is more interested in our obedience to, and faith in, Him than in the circumstances surrounding us.

It was nearing the end of the road for Moses. God invited him to a mountaintop overlooking the Promised Land. There, He reminded Moses that, due to his previous rebellious action in a fit of anger, he would not be allowed to enter the Promised Land – but would at least be able to see it before his death.

Think about that for a moment. Moses spent his first forty years as a pampered prince in Egypt, the next forty years out in the dry, dirty desert (where God prepared him for the job of leading His people out of Egypt and to the Promised Land), and then the final forty years actually leading the Israelites through their desert wanderings.  So, after eighty years of pursuing the arrival at the land God promised them, Moses fell short due to his momentary anger and disobedience.

Striking Instead of Speaking

Do you remember the story? While wandering in the desert, the Israelites’ water source went dry, so they complained to Moses.  He asked God to intervene, and was instructed to hit a certain rock with his walking stick.  Upon doing so, water gushed out.  Some time later a similar situation occurs. The water runs out, the people complain, Moses asks God for help – only this time God tells Moses to speak to the rock.  But, in a momentary lapse of judgment, Moses gets frustrated with the people’s constant complaining, allows his frustration to move to anger, disobeys God’s instructions, and strikes the rock – twice! That momentary sin cost Moses the privilege of leading the Israelites into the Promised Land.

Even though Moses was a faithful servant who enjoyed an intimate fellowship with God, he failed in his obedience to God. And God showed His displeasure by forbidding Moses’ entry into the land of promise. This serves as a sober reminder that God is holy and He never changes. His standard of holiness isn’t dependent on the circumstances, the people involved, or even the vacillating societal standards of “relativism.” Peter reminds us, “As he who called you is holy, you also be holy” (1 Peter 1:15).