Overcoming the Pain of Living in Quarantine 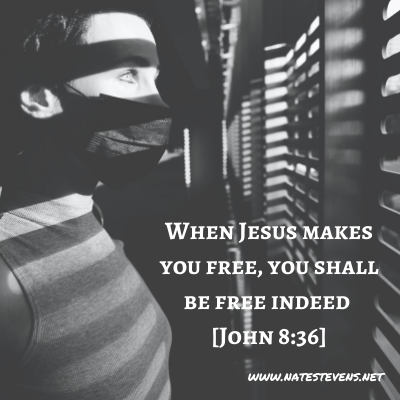 As we approach the anniversary of the coronavirus and associated quarantine, we hear of the after effects of such lockdowns. Life as we knew it has drastically changed. Church attendance is much lower, yet online streaming attracts a far larger audience. Working from home may impact overall productivity, yet many employees enjoy not having to drive in and from the office. Schools vacillate between in-person attendance versus online teaching. Sports events showcase audiences filled with cardboard cutouts and prerecorded sound. Social gathering is discouraged. Human identity fades behind masks.

Controversies, conspiracy theories, arguments, and opinions surge through main stream and social media venues. All sides seem adamant about their positions, yet not everyone can be right, at the same time, about the same issue. Regardless, there seems to be no compromise from either viewpoint.

Through it all, one major problem keeps surfacing: Isolation.

Such isolation and related effects remind me of a story in the Bible. A certain woman had a medical issue that kept her quarantined—for twelve years! We’re struggling with just one year, imagine multiplying that by twelve. Just considering one example, an American child could go through their entire education in that time.

Let’s review this woman’s story. It may help encourage us as we face our extended quarantines and periods of isolation from what we love most.

Now a certain woman had a flow of blood for twelve years, and had suffered many things from many physicians. She had spent all that she had and was no better, but rather grew worse. [Mark 5:25-26]

Twelve years of not being able to worship in the Temple. Other people had to represent her with her offerings and sacrifices. Twelve years of living alone. No one came near her, much less touch her. Twelve years of separation from family and friends. No contact, no connection, no sense of community, belonging, or acceptance. Twelve years of pent-up emotions. With whom could she share them? No one cared nor stayed long enough to listen. She had so much to share, yet isolation suffocated it all.

One day, she decided enough was enough. She heard about a man called Jesus who had been healing all sorts of diseases. There had even been some rumors that He had raised some people from the dead. If only she could approach Him, maybe He could help her.

But her disease demanded she remain isolated from society. In shame, everyone considered her “unclean.” Anyone she touched would also become unclean. Even if someone accidentally bumped into her rendered them unclean. So, she was shunned. Devoted family and friends periodically dropped off food. Occasionally, some would talk with her through the open door or windows, yet at a safe distance. Oh, how she longed for some personal interaction and the warmth of a human touch. But what could she do?

Sneaking Up on Jesus

That’s when it hit her. Although she could never confront Jesus face to face, maybe she could sneak up to Him. She would mask herself and mingle with the massive crowds gathered around Him. When He was looking elsewhere, jostled by the crowd, she would sneak in for a quick touch. He healed others with a mere touch; if He was all that, a quick touch from her just might help. In utter desperation, she put the plan into motion.

When she heard about Jesus, she came behind Him in the crowd and touched His garment. For she said, “If only I may touch His clothes, I shall be made well.” Immediately the fountain of her blood was dried up, and she felt in her body that she was healed of the affliction. [Mark 5:27-29]

Power surged through her. As if electrified, she stood ramrod straight. She knew immediately that something wonderful happened. Though she would test it when she returned home, she was convinced she had been healed! Her mind whirled with ideas she hadn’t thought for over a decade. “Oh, happy day! My physical illness and societal shame and isolation have ended! I can’t wait to prove to everyone I’m back! I can’t wait to hug everyone!”

Then she heard her name.

Uh-oh. Her cover was blown; her identity known. Had her mask come down? Did someone recognize her? She had gone to great lengths to disguise herself. All she wanted was healing! Why, oh why did she have to get caught? That was just her kind of luck! Why couldn’t she just leave this pushy, noisy, smelly crowd and enjoy her newfound strength?

And Jesus, immediately knowing in Himself that power had gone out of Him, turned around in the crowd…to see her who had done this thing. But the woman, fearing and trembling, knowing what had happened to her, came and fell down before Him and told Him the whole truth. [Mark 5:30-33]

The shame and loneliness of isolation was one thing. This new level of fear, being called out in front of this huge crowd was at another level altogether. How was she supposed to know He would find out? How could He tell the difference between an accidental shove and an intentional touch? If He asked for money, she didn’t have much. How much was her healing worth? What if she didn’t have enough? Although she had only enjoyed her healing momentarily, she just couldn’t go back to her old way of life. She couldn’t!

Then Jesus touched her.

The Touch of The Master

Jesus knew she had been healed and was no longer unclean. No need for further quarantine. He connected with her. Oh, the joy of human touch! Taking her trembling hand in His steady, firm, suntanned hands, He tenderly raised her from the dusty street. He carefully removed the mask hiding her fear and shame. No, He didn’t condemn her. And there would be no charge or scolding for her healing. In front of everyone, He proclaimed her healed and in His good graces.

He said to her, “Daughter, your faith has made you well. Go in peace, and be healed of your affliction.” [Mark 5:34]

With those words, Jesus freed her from her quarantine. Spiritually healed. She could resume going to the Temple herself. Emotionally healed. She could connect with her family and friends. Dinners together. Birthday celebrations, weddings, anniversaries, yes, even funerals—she could be present and engaged with everyone. Intellectually healed. No more thoughts of boundaries, fear, disguises, and isolation. No more shame and unworthiness. Physically healed. No more weakness, masks, doctors, or expense. Yes, it is true—whoever Jesus sets free is free indeed [John 8:36].

Overcoming the Pain of Quarantine

We may not be able to orchestrate immediate freedom from the current lockdown restrictions. But we can rejoice in the fact that Jesus brings us freedom.