21st Question Jesus Asks (From the Gospel of John) 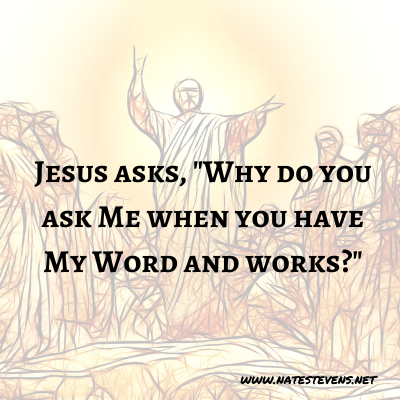 After His arrest, the armed mob brought Jesus to the high priest. Before they could “legally” kill Him, the religious elite needed to interrogate Him. Hopefully, He would say something incriminating.

When the high priest asked Jesus to explain His doctrine, Jesus asked His first question.

“I spoke openly to the world. I always taught in synagogues and in the temple, where the Jews always meet, and in secret I have said nothing. Why do you ask Me? Ask those who have heard Me what I said to them. Indeed they know what I said.” [John 18:20-21, bold test added].

Nothing of Jesus ministry was secretive. He had no hidden agenda, no plans to overthrow the Romans. Never did He encourage rebelling against the religious establishment. He lovingly met individual people at the place of their need and changed hearts, one at a time.

Obviously, His honesty and transparency didn’t set well with His interrogators.

When He had said these things, one of the officers who stood by struck Jesus with the palm of his hand, saying, “Do You answer the high priest like that?” Jesus answered him, “If I have spoken evil, bear witness of the evil; but if well, why do you strike Me?” [John 18:22-23, bold text added]

There was no reason to slap Jesus. He had spoken the truth. However, rebellious, power-hungry, and vengeful “leaders” tend to overstep even perceived authority. Unless the high priest and officer who hit Him repented before they died, they will face these same questions in eternity.

“Why do you ask Me?” We have God’s unchanging, consistent, eternal Word. Its message is complete—it contains all we need to know. Yes, some portions are mysterious. Some answers may not be known until we reach Heaven. But God gave us His complete Word. It answers every question—if we would only read it, accept it, and incorporate it into our lives.

“Why do you strike Me?” No one thinks of physically hitting Jesus. But what about the other ways by which we hurt Him? As believers, walking in sin shames His name and hurts His cause. As unbelievers, continued rejection cheapens His sacrificial death on Calvary. He encourages both groups to repent, accept Him as Savior and Lord, and receive His forgiveness and eternal life.

May we never question God’s Word or ways. Oh, may we live each day in anticipation of standing before Him one day.