22nd Question Jesus Asks (From the Gospel of John) 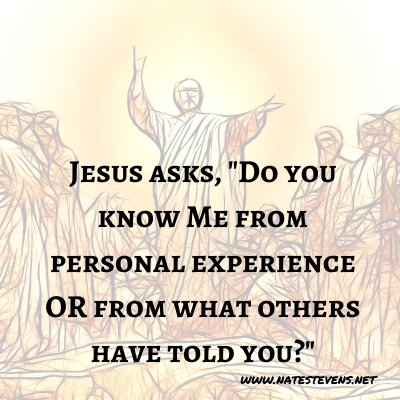 22nd Question – Are You Speaking for Yourself or did Others Tell You This About Me?

Yet, they all had sufficient evidence—if they only looked with eyes of faith. Jesus fulfilled every Old Testament prophecy about the Messiah. His teachings and methods were “with authority” [Luke 4:32]. The supernatural miracles were well-known. His Kingdom message was unmistakable.

So, why the doubt, uncertainty, and repeated questions? Jesus implied as much when He questioned Pilate.

Jesus answered him, “Are you speaking for yourself about this, or did others tell you this concerning Me?” Pilate answered, “Am I a Jew? Your own nation and the chief priests have delivered You to me. What have You done?” Jesus answered, “My kingdom is not of this world. If My kingdom were of this world, My servants would fight, so that I should not be delivered to the Jews; but now My kingdom is not from here” [John 18:34-36, bold text added].

As governor of Judea, surely Pilate had heard of Jesus. He must have already sent his undercover officers to follow, listen, and report back. It was his duty to stay informed about possible insurrection. Oh, he knew enough to know there was something different about Jesus—something that posed no threat to Pilate’s earthly rule. Even Pilate’s wife warned him, “Have nothing to do with that just Man, for I have suffered many things today in a dream because of Him” [Matthew 27:19].

Yet, in spite of all the evidence, by his own admission, Pilate didn’t recognize truth—even when it stood right in front of him [John 18:38].

How often do we question just like Pilate. In spite of all the promises in God’s Word, uncertainty and fear still creep in. Regardless of all God’s assurances, we still squirm in adversity. For the still unbelieving, even though faced with insurmountable historical evidence, prophetic fulfillment, and supernatural proof, doubt, ignorance, and rejection still rule.

What other assurance do we need beside God’s Word? What else does Jesus have to do to prove He is Who He said He is? Come back to earth in majesty and power with the title, “King of kings and Lord of lords”? Well, He’s going to do just that [Revelation 19:11-16]. However, by then, it will be too late for repentance and belief.