24th Question Jesus Asks (From the Gospel of John) 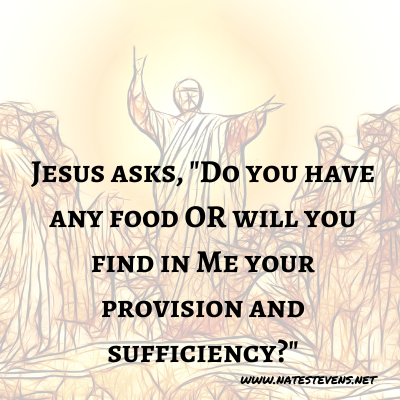 24th Question – Do You Have Any Food?

Following Jesus’ command to meet Him in Galilee after His resurrection, the disciples went to the Sea of Galilee. However, they went fishing—the very thing Jesus called some of them from. This is where Jesus found them—in the comfort zone of their past.

They went out and immediately got into the boat, and that night they caught nothing. But when the morning had now come, Jesus stood on the shore; yet the disciples did not know that it was Jesus. Then Jesus said to them, “Children, have you any food?” They answered Him, “No” [John 21:3-5, bold text added].

In this moment, apart from Jesus, they retreated to attempting to meet their needs on their own. Perhaps they grew impatient waiting for Him. Maybe they were disillusioned by His death that apparently negated His coming kingdom. No matter the reason, they were emptyhanded. They didn’t even recognize Jesus when He arrived.

Jesus’ question exposes the futility of returning to what He has called us from. They were experienced fishermen on known waters, yet they caught nothing. The question also targets the evidence of emptiness in human effort apart from Jesus. “Without Me you can do nothing” [John 15:5].

But the question also confirms Christ’s all-sufficiency. “All things are possible with God” [Mark 10:27]. Twice before, they had seen Him feed the multitudes with next to nothing. They experienced His provision during three and a half years of His ministry.

As He did with everyone else, Jesus met the disciples at their point of need.

And He said to them, “Cast the net on the right side of the boat, and you will find some.” So they cast, and now they were not able to draw it in because of the multitude of fish [John 21:6].

In His lovingkindness, Jesus called them ashore where He had breakfast waiting—fish, no less. The very thing they sought. Everything about this encounter pointed them toward dependency on His sufficiency.

In our response to this question, we must admit our lack apart from Him. He alone supplies our every need [Philippians 4:19]. May we be found faithful to where and what He has called us [Luke 12:43]. Oh, may we never stray from dependency on His provision and sufficiency. Instead of hearing, “Do you have any food?”, may we hear Him warmly say, “Well done faithful servant. Enter into the joy of your Lord” [Matthew 25:21].