6th Question Jesus Asks (From the Gospel of John) 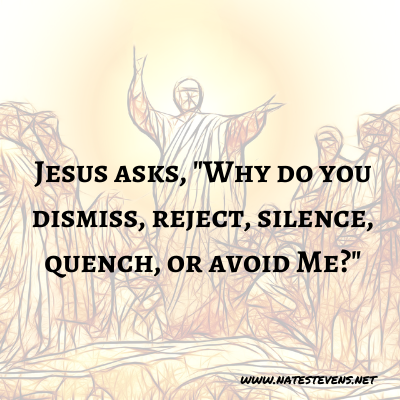 6th Question – Why Do You Seek to Kill Me?

Every person must answer the Jesus-question eventually. Is He who He claimed to be?

The religious establishment of Jesus’ day were furious with Him. He challenged their burdensome oral laws, man-made traditions, and empty ritualism. He actually healed people on the Sabbath! Even after expressly being forbidden to do so. They publicly opposed Him, rejected His claims and miracles, and wanted to “dismiss” Him by whatever means necessary.

However, the vast listening audience was divided. Some regarded Jesus as good; others claimed He was a master deceiver. Who could deny His miracles? Or the authority with which He spoke? On the other hand, maybe He was insane or demon-possessed? Either way, He was the talk of the town—but secretly because no one wanted to cross the religious establishment.

But Jesus stayed on point. He knew His identity and purpose. He also knew the inner thoughts and intentions of those malicious, murderous religious leaders.

Jesus answered them and said, “My doctrine is not Mine, but His who sent Me. Did not Moses give you the law, yet none of you keeps the law? Why do you seek to kill Me?” [John 7:16, 19, bold text added]

He not only saw their hateful and dismissive hearts. He foresaw the near future when they would eventually kill Him on Calvary’s cross.

Killing for the Jewish religious leaders was the ultimate way of discrediting, dismissing, or silencing Jesus. All were outcomes of their rejection of Him as the Son of God. Although we would never consider killing Jesus, quite often we dismiss or silence Him.

Dismissing or silencing Him shows up in various forms. Outright disbelief. Blatant disobedience of His Word. Hardened hearts. Rejection of His call to follow Him. Failure to share Him due to shame, fear, or potential loss of social status. Quenching the Holy Spirit. Unavailability to serve Him. Worldly tolerance. Moral relativism. We find many creative ways to avoid raising even the topic of religion, much less Jesus. And His questions remain unanswered.

Yet, eternal salvation comes only by the name of Jesus [Acts 4:12]. One day soon, every knee will bow and every tongue will confess that Jesus Christ is Lord [Philippians 2:10-11]. We will all stand before Him, whether at the Judgment Seat [Romans 14:10] or the Great White Throne [Revelation 20:11-15].

May we avoid “killing” Jesus by sharing Him passionately [Acts 4:19-20], letting His light shine through us daily [Matthew 5:16], and following obediently as He leads [John 10:27].