Rainbow over Rotorua – A Tribute to Billy Graham 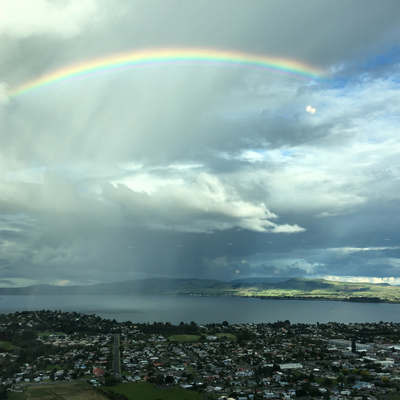 And life went on…

The day I heard of Billy Graham’s passing, I was vacationing in Rotorua, New Zealand—half a world away from Charlotte, North Carolina. While to me it seemed the world’s spiritual temperature dropped considerably, people in my vicinity scurried about their normal routines working, vacationing, shopping as usual, little knowing a spiritual giant had quietly slipped to his celestial home. After all, it had been thirty-one years since Billy last held a crusade in New Zealand.

That evening, my wife and I dined at Stratosfare, an incredible restaurant high on a hill with huge windows offering magnificent views of the city and lake below. As we ate, we watched rain clouds rumble in, misting half the lush valley in cascading sheets while the other half basked in crisp, evening sunlight. Between these contrasting vistas, God stretched a gorgeous rainbow radiating with vivid hues. I’ve see many rainbows, but this one was spectacular. It covered most of the sky, remaining suspended for most of our dinner. Many fellow diners also snuck to the window for pictures.

The news and scene reminded me of when I sang in the choir for the Billy Graham Crusade in Jacksonville, Florida in 2000. We practiced for weeks in the sanctuary of First Baptist Church—tenors and basses downstairs, altos and sopranos in the balcony—while Cliff Barrows led us through the songs.

On the opening night of the four-day crusade, I excitedly climbed the stadium steps to the choir’s reserved seating behind the main platform. I had one of the best seats in the house to observe Billy, Cliff, George Beverly Shea, and the Gaither Vocal Band.

After the usual rounds of stirring music, Billy strode slowly to the stage. Already into his early 80’s, he needed a chair-stool on which to rest after standing during his sermon. But once he began, he was the person I recall seeing on television at previous crusades. He spoke powerfully, yet simply in message. I was spellbound hearing God’s truth from such a humble messenger.

When he finished and gave the usual invitation to come forward to make a decision for Christ, I expected what I had seen at previous crusades. Yet, no one moved.

At that time in my life, I was still living in the Prodigal pigpen of sin. I had volunteered to sing because I have always loved Gospel music, the Gaither Vocal Band was performing, and it was Billy Graham! In retrospect, I know God orchestrated that night’s events to prompt my return to an intimate, obedient walk with Him. When I noticed no one responding to Billy’s invitation, my conscience pricked me. I was the Achan in the camp. God’s spirit was restrained because of my sinful lifestyle. I was to blame for throttling spiritual revival at the Jacksonville Crusade!

Then I noticed what Billy did. That picture remains etched in my mind. He slowly leaned back on his chair-stool, placed his hands on the sides of the podium, bowed his head, and closed his eyes. It was a supernatural moment when the physical and spiritual realms are jointly visible to the human eye. Billy remained there, motionless, his long, white hair gleaming like a lion’s mane. There he sat, God’s warrior statuesque, boldly grasping God’s throne in prayer, and interceding for people he didn’t know. Even me.

A spiritual shock wave then seemed to pulse through the stadium. People shot out of their seats like they were on fire and cascaded to the open space in front of the main platform. I could see tears streaming down faces as the crowd was pictured on the jumbotron television screens.

God’s rainbow over Rotorua brought that cherished memory to life. It witnessed to His faithfulness between the storms and sunshine of life. His unconditional and universal love remains available for all. He paints His sky to remind us of His presence and invite us to His side.

The thunderstorm reminded me the seasons of life befall us all—and death is everyone’s inevitable storm. Billy Graham was prepared for his final storm and Heaven welcomed him the moment he breathed his last on earth.

Many people hunger and thirst for the peace, love and assurance Billy Graham had and preached. Those who know Christ as personal Savior have already claimed the truth from God’s Word, “For God so loved the world that He gave His only begotten Son, that whoever believe in Him should not perish but have everlasting life” (John 3:16).

From the rainbow over Rotorua comes this reminder: don’t let life simply pass by. Come to Jesus. Accept Him into your heart and life. Then, become a change agent. Let God’s light shine through you. Be a rainbow across someone’s stormy skies.

Rest in Peace, Reverend Graham. I look forward to seeing you again one day. Until then, thank you for faithfully fulfilling your destiny and prompting me to return home.