Why Seek the Dead Among the Living? 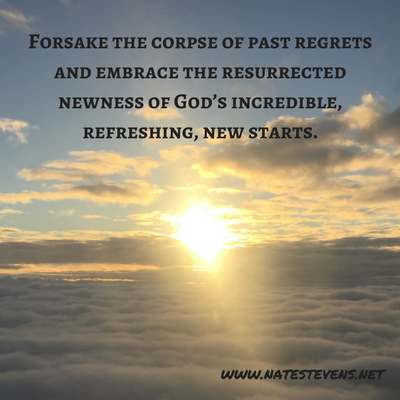 Almost everyone lives with some form of regret.

In my youth, I considered trying out for a professional football team. Having the size and speed, I thought I could make it. But three weeks before training camp, a mature mentor who I respect deeply, had a father-son talk with me about my decision. As a result, I changed my mind. Whether I would have made it or not, I have fleeting moments of regret for not even trying.

I have several other more regrettable moments in life. Foolish decisions. Unhealthy relationships. Years wasted in the Prodigal pigpen of sin. Tarnished reputation. I regret them all deeply and wish I could reclaim those decision, choices, and years.

Even God has regrets. Just before the Flood, He regretted making man (Genesis 6:6). After giving Moses the Ten Commandments, when He saw the Israelites dancing around the golden calf, He regretted delivering them from Egypt and wanted to destroy them all (Exodus 32:7-10).  He regretted making Saul king of Israel (1 Samuel 15:35). Notice, His regret follows disappointment over sinful choices and lifestyles.

Yes, we regret the skeletons in our closets. But, thank God for His forgiveness, second chances, and renewing transformation. His blessed hope encourages us to stop carrying dead regrets and live in His new life.

And for those of us who are a bit more stubborn and need more convincing that God can and will seemingly do the impossible in forgiving our regrettable pasts and helping us begin again, a story in 2 Kings Chapter 3 might be encouraging.

To summarize the story, several armies had marched seven days into the wilderness and had no water. They probably regretted such poor strategy of not carrying along enough water or not planning a better route. Regardless, they made the wise choice of asking Elisha to ask God for help.

There in the middle of the barren wasteland of regret, God rescued them. “For thus says the Lord: ‘You shall not see wind, nor shall you see rain; yet that valley shall be filled with water. This is a simple matter in the sight of the Lord. Now it happened in the morning…that suddenly water came…and the land was filled with water” (2 Kings 3:17-18, 20). God simply and suddenly did the impossible.

He will do the same for you.

Doing a New Work in You

God is at work bringing you to a new place. Your past experiences are the classrooms for your future. Don’t relive or repeat the past; learn from it and involve God in all choices and decisions. Allow God to transform regret into rejoicing over what He wants to do for you. Claim God’s promise: “Do not remember the former things, nor consider the things of old. Behold, I will do a new thing, now it shall spring forth; shall you not know it?” (Isaiah 43:18-19).

Walk in God’s unmerited grace. Accept His unlimited forgiveness. Bask in His unmatched favor. Forsake the corpse of past regrets and embrace the resurrected newness of God’s incredible, refreshing, new starts.