Freedom from the Porch of Weakness 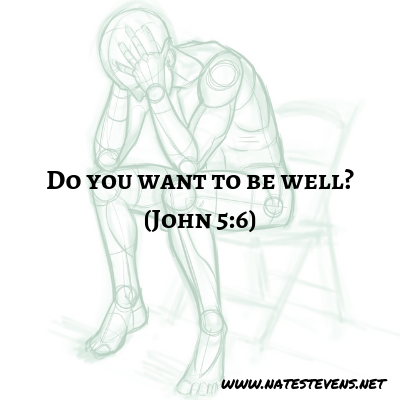 What? Do I want to be well? I bristled at the question.

What kind of insensitive thing is that to ask of someone in my condition? Who did this stranger think he is? He does not know me—why would he presume there was something wrong with me! Like I had some weakness!

But deep down, his question struck a nerve. For years, I stuffed my pain deeper and deeper. I thought I could forget, get over it, and get on with life. And yet, the more I suppressed, the more it imprisoned me in inner turmoil.

Every day for the past thirty-eight years, sickly, weak, hopeless people surround me. Chronic coughing announces noticeable disabilities. Grayish skin, emaciated faces, and staring eyes warn of death. Some suffer in silence while others pester those nearby. Too often, the complainers whine about their unjust circumstances or the unfairness of life. They blame everyone else for their present situations.

However, a handful do admit their suffering and hardship is self-inflicted. Previous poor choices burdened them with disease, regret, and loss.

Then there are those unfortunate souls born into this hell hole. Blind, lame, disfigured, paralyzed, or contagious… They are here strictly because fate frowned on them. I’ll never understand why things like that happen. But they are exiled with the rest of us in this hot, musty oasis of abandonment and hopelessness.

I hate that I am part of this disgusting scene. Most sickening is the realization I did not have to be here. My own shameful weakness brought—and keeps—me here.

Somehow, I suspect this stranger kneeling beside me knows it too.

I had watched him wade through the appalling mass of humanity sprawled on threadbare blankets, straw, or whatever extra clothing they owned. He wasn’t like most people who purposefully avoid this area. His presence and movement were intentional. Surprisingly, he didn’t wrinkle his nose against the stench of reeking, unbathed bodies and human waste. Nor was he overwhelmed by the flies flitting between festering sores.

He courteously stepped around each person, patiently waiting as they shifted out of the way. Could he be a physician appointed by a wealthy family to check on their discarded family member? Family usually didn’t come to this forgotten place. No, he was not a physician—he wasn’t the least bit arrogant. He couldn’t be a religious zealot either. They never came here—our impurity was beneath them.

What was he doing here and where was he going?

He kept coming, closer. Pulse quickening, I looked away, nervously straightening imaginary wrinkles in my robe.

Surely, he wasn’t coming for me. I’m a nobody who had no one. Family and friends abandoned me long ago. I embarrassed them. They couldn’t relate to my situation. I was the one with the problem. So, here I was, alone with no one who cared, no one to help me. But I’m used to it—at least that’s what I pretend.

Waiting on the Expected

If you wonder what help I needed, let me explain. See, this Pool of Bethesda, surrounded by five porches, is rumored to hold some magical powers. Some even think an angel periodically stirs the waters and whoever enters first will be healed.

However, that’s part of my problem.

First, I’m not sure I believe such nonsense. Over the past thirty-eight years, all I’ve seen, heard, and smelled is misery, sickness, filth, and death. I’ve seen very few who were “healed.” Mostly, I suspect those people hobble off to either die or live out their shame in isolation.

Secondly, even if magic or angels existed, I don’t have anyone to help me to the water. Many of these fools crowd the water’s edge, then roll in at the slightest ripple caused by the lightest breeze. No, my fate is sealed. I am here, alone, plagued by my own frailty. A prisoner to my long-term weakness.

That is, until the stranger stepped beside me and knelt on one knee.

Then… He touched me. Even in the blazing afternoon heat, feeling his warm, calloused hand cascaded shivers over me.

No one has touched me in years—at least, not on purpose. I forgot what that felt like. And these decrepit societal cast-offs don’t count. Their touch is accidental at best, territorial at worst. But this man’s touch was intentional, compassionate, connecting.

Soft, brown eyes pierced my defenses. His warm, authentic smile awoke assurances long forgotten. “Do you want to be well?” wasn’t insensitive at all. It spoke to my weakness, unveiled my intentions, and presented a choice.

Questions flooded my mind—almost as if he were conversing at a subconscious level. Do you intend to stay here or do you want to leave? Are you comfortable in your discomfort or do you want rest for your soul? Do you enjoy the misery and shame of your weakness or do you long for release and freedom in someplace far better? Can you envision your future potential or do you wish to remain here, unchanged? Do you want to be well?

I sensed no judgment or coercion. His questions engulfed me in understanding, companionship, and reassurance. Almost as if he were acquainted with my grief and pain. But, how could he? He didn’t know me. How could he know my struggle with guilt and shame? Surely, he came here by mistake.

And yet, his question was more an encouraging invitation than insensitive inquisition. Something inside me longed for freedom. A fire ignited with the passion to start anew. This stranger prompted self-esteem long wilted. Yes, he made me consider leaving—finally!

But, could I? Should I? What would I tell my comrades in misery if I leave? Even worse, what will my family and friends say when I show up? People associate me with this place of rejection and failure! Do I dare? Where would I go? What would I do?

Gazing into this stranger’s eyes, I saw his approval for release from my weakness. I sensed my heartbeat align with his as I took his outstretched hand and stood.

It matters not. He beckons me to my first step toward freedom.

Stand fast therefore in the liberty by which Christ has made us free, and do not be entangled again with a yoke of bondage (Galatians 5:1).