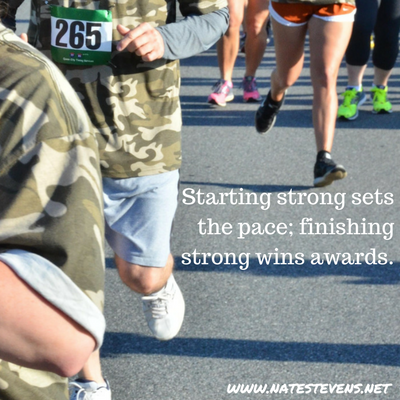 In 1 Kings 13, we find a “man of God.” He is unnamed, so let’s call him Bob. He accurately prophesied the birth of King Josiah and his future purging of the false prophets in Judah. Bob also healed the king’s shriveled hand God gave him after he threatened Bob for his prophecy. From these events, we know Bob heard God, aligned himself to God’s purpose, and demonstrated God’s power.

From the start, God told Bob to go straight home after sharing his prophecy with the king. He could not stop for anything to eat or drink or even return home using the same road he took to get to the palace. That meant no hotel reservations, no rest stops, and no fast food on the way.

After he prophesied, was threatened, and subsequently healed the king, the grateful king invited Bob to dinner and offered him a present. But Bob refused – even if the king had offered him half his kingdom. This reveals Bob’s integrity and courage.

Faltering Down the Stretch

However, after his refusal of the king’s invitation, Bob received another dinner invitation. But this one came from a certain old prophet. See, Bob stopped on his way home to rest in the shade of a nearby tree. Along came this old prophet with the deceptive message that they were on the same side, listening to the same God. He said God told him to bring Bob back to his home for dinner. As colleagues, they would enjoy dinner and conversation.

It was easy to refuse an evil king. But it was difficult to refuse a fellow prophet who seemed courteous and hospitable. I am sure Bob reasoned, This guy is also a man of God, so surely it will be okay. He did say God spoke to him, right? Besides, it would be good to fellowship with another prophet. Unfortunately, the old prophet was lying. His mission was deception and distraction. Sadly, they were soon seated at his table.

That is when God interrupted dinner. Through the old prophet, God condemned Bob for not fully obeying Him. He prophesied that God would kill Bob on his way home.

Bob started strong, but faded along the way. He heard from God, initially obeyed Him, and had the courage to stand in the face of evil. Additionally, he had power from God to heal and had the anointing of God for His special mission. Yet he failed to finish strong and paid dearly for his mistake.

Sadly, Bob was vulnerable to deceit. He was tempted with physical desires, even though God expressly prohibited them. Instead of staying true to what he knew God told him, he listened to man. Not trusting what he knew to be true, he listened to someone he thought he could trust – based solely on what this person told him. He didn’t even ask God for the man’s background check!