A Strong Work Ethic is Part of Your Christian Witness 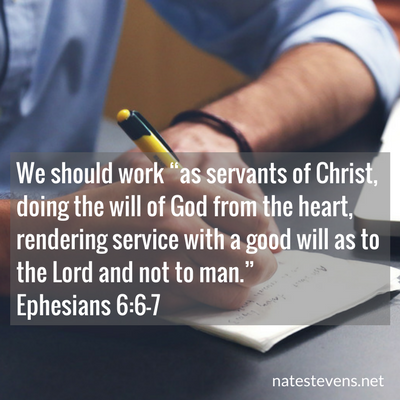 Let all who are under a yoke (work) as slaves regard their own masters as worthy of all honor, so that the name of God and the teaching may not be reviled. (1 Timothy 6:1, ESV, parenthesis added)

A strong work ethic is a testament to our faith. As believers, it is part of our witness to others and is honoring to God.

Have you ever worked with professing “Christians” who spout off religious clichés and Scripture verses, yet who have a reputation for being lazy? I have. To be honest, I’ve been tempted to ask them to claim a different religion or work as hard as their mouths did.

As Paul continues his mentoring of Timothy, he touches briefly on a Christian’s work ethic. The words “under a yoke as slaves” identifies those who work in the employ of others. This could be involuntarily as a slave or voluntarily as a servant / employee. Though the term “servant” may sound offensive, it signifies a relationship synonymous with employment. Actually, several New Testament writers self-identified as “servants of Christ” in following His plan for them (Paul, James, Peter, Jude).

When Paul wrote this letter to Timothy, slavery was an acceptable source of labor. When servants became Christians, Paul encouraged them to fulfill their duties fully and honorably. That way, God’s name and Christianity wouldn’t be reviled (slandered, blasphemed). And if one of their masters also became a Christian, that shouldn’t lessen their resolve or effort.

Thankfully, slavery was abolished in our country. Yet, the employer / employee arrangement still exists. Within that relationship, Christians should demonstrate such a dedicated effort that their faith and God’s name are not disgraced. We should work with “sincerity of heart, fearing the Lord” and perform our duties “heartily, as for the Lord and not for men” (Colossians 3:22-23).

Our work effort shouldn’t be merely to impress or please our earthly employers. Rather, we should work “as servants of Christ, doing the will of God from the heart, rendering service with a good will as to the Lord and not to man” (Ephesians 6:6-7). As the Sovereign Lord of our lives, God places us in specific jobs for a reason. We honor Him by accomplishing our duties with strong and productive performances.

With the current restrictions against verbally sharing our faith in the workplace, our performance may be the only method for us to witness while at work.