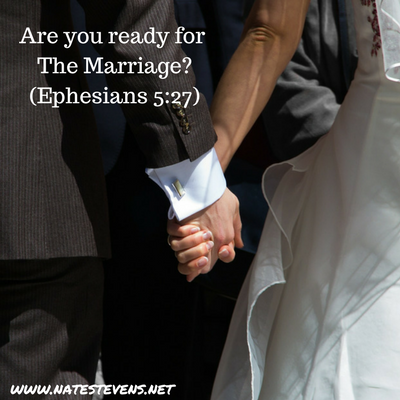 That He might present her to Himself a glorious church (bride), not having spot or wrinkle or any such thing, but that she should be holy and without blemish [Ephesians 5:27, parenthesis added].

Their courtship was long and difficult—but well worth the wait.

He loved her and knew deep inside that she could eventually love him too. Yet, she initially hated him. Among her more derogatory thoughts, she considered him too straight-laced and boring. Actually, she suspected he was too good to be true. Even after getting to know him, she was often distant and distracted from the deeper level of intimacy and companionship he so desired them to share.

When they first met, she was hardly a perfect choice for a companion. In reality, she was a mess. She was deeply troubled, consistently made poor choices, and seemed destined for the dust heap of condemned failures.

But something in her melted his heart. Sure, she had her flaws, failures, and issues; yet somehow he looked beyond her shortcomings to the frightened, abandoned, manipulated little girl still desperately clinging to an ember of hope in her harsh, cold world of disappointment, disillusionment, and betrayal.

Their life experiences were vastly different. He was royalty; she was lowly. He had everything he needed; she had nothing of real value. He was healthy; she was sickly. He embodied life itself; she blindly careened through life, bouncing from one hurt to another, often considering her life worthless.

To most outsiders, any hope of a relationship between them seemed ridiculous. He could have the choicest of all brides, any one of whom surpassed this poor, distraught, hot mess of a train wreck. Naysayers often questioned his fawning attention, his heartfelt desires, his hidden motives. “Why her?” they asked. “What’s so special about her? What could you possibly see in her that none of us see?”

Oh, but his gaze wasn’t focused on her circumstances, past experiences, crazy outbursts, or frequent failures. He disregarded her attempts to end their relationship. Also, he overlooked her silence when she ignored him to chase the mirages of perceived enjoyment elsewhere.

Even after they developed a friendship, she was unfaithful to him. Quite often. For some strange, dark reason, her heart had a tendency to wander. Even though she knew he was the best thing that would ever happen to her, she was still selfish, had unreasonable demands, and willfully chased her frivolous pursuits.

His feelings for her weren’t the superficial kind of a star struck lover enchanted by infatuation or unhealthy dependence. No, his love was unselfish, patient, passionate, and persistent. He knew who he was and was assured of his purpose and destiny. Matter of fact, he didn’t really even need her to fulfill his mission.

And yet, he loved her. He chose to love her.

He responded every time she called. He met her needs even when she was unaware of his generosity. Though she strayed often, not once was he unfaithful to her. Through all her self-inflicted and traumatizing experiences, he spoke peace and healing into her life. He was her only true source of love, joy, compassion, integrity, authenticity, wisdom, and peace. Not once did he abuse, control, or manipulate her to stay with him, respond to his advances, or love him. He remained faithful to himself and to his abiding love for her.

Yes, it cut deeply when she rejected him. Though hurting, alone, and despised by everyone else, she turned a cold shoulder to his loving companionship and escalated her painful pursuits. As agonizing as her rejection was, it didn’t compare to the heartbreak when she denied even knowing him. When friends and colleagues asked about their relationship, it embarrassed her and she quickly denied, “What, him? No, we’re just hanging out. He’s a nice, attractive guy, but I need someone more exciting, more tantalizing!”

She didn’t realize he overheard all her rejections and denials. They sliced his pure, tender, loyal heart like a dirty, infected razor. Oh, how he ached for her to truly see him! How he longed for her to understand his loving intentions, to know he meant her no harm. He knew he could give her what she desperately sought amidst the counterfeits of life. But he never thought about abandoning her.

He was her constant, her north star, her home. He was the only stability in her life. And yet, she somehow found new ways within her throbbing, broken heart to hurt him, lash out at him, betray and reject him, and deny him.

Yet he loved her still.

Over time, she agreed to a relationship with him. Yet even within that exclusive bond, she still fought her wandering eye. Instead of seeking just him and the safety and security of an intimate relationship, she became distracted by the things he provided for her. Instead of pursuing him, she often busied herself with what she could do for him. Interspersed between times of intense nearness and communion, she would fall back into lukewarm, casual despair.

Yet through it all, he remained steadfast in his pursuit. He showed compassion when she was unlovely. He calmed her when she grew stormy. He helped her up when she fell. When she strayed or grew distant, he patiently waited. He forgave her indiscretions even before she asked. He relished their times of close connection and never brought up her past. He healed her hurts, wiped away her tears, and mostly was just there beside her, faithful.

As years past, she came to appreciate him. She asked more questions and focused her attention on him. In finding ways to please him, she became less distracted by other tempting calls. In seeking him for who he was instead of what he could provide, she found him to be the answer to her questions, the faithfulness for her hesitation, the strength for her weakness, the stability for her confusion.

She had nothing of value to offer in return for his loving graciousness, devotion, and care. Nothing, except what he craved most—herself. And so she gave, slowly but surely surrendering more of herself to him. He was trustworthy so she became vulnerable. He was faithful so she trusted. He pursued her with a steadfast, pure, and intense love so she ultimately accepted him, his love, and his future.

Almost immediately everyone saw the difference in her! She beamed with a fresh glow. She was by no means perfect, but being with him, trusting him, growing together with him, she found in him the reason to truly live and love. He had weathered her storm and was trustworthy.

He improved her. When he called, she responded. When he was around, she no longer was embarrassed being associated with him. When he looked at her, she no longer turned away in fear and loathing; rather, she lost herself in his adoring gaze, strong embrace, and loving presence. She often wondered why she waited so long to claim him as her own.

Presented to the Father

Then came the fateful day when he announced it was time to present her before his father. With breathless anticipation, she longed to see the father about whom her groom had talked so lovingly. Elation turned into awe as he whisked his bride-to-be from her home to stand in his father’s presence! Surprisingly, the trip was quicker than expected and she soon stood, robed in white, before the father of the man she had grown to love and adore.

Then I, John, saw the holy city, New Jerusalem, coming down out of heaven from God, prepared as a bride adorned for her husband. (Revelation 21:2)