The Work of God’s Angry Hornets 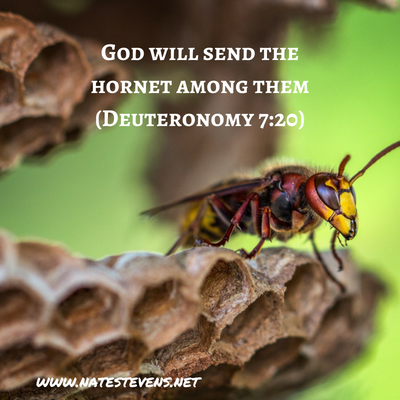 Moreover the Lord your God will send the hornet among them until those who are left, who hide themselves from you, are destroyed. (Deuteronomy 7:20)

I do not like bees, wasps, hornets, or any other stinging insect.

When I was just a child, I recall my dad mowing a large section of pasture while I followed along at a discreet distance. I wanted to “help” him in the work; however, my proximity also brought me into contact with some angry bees.

He must have mowed over an in-ground bees nest as the air was soon filled with an angry swarm. As he turned off the mower and sprinted away, he hollered for me to do the same. Unfortunately, my young legs were no match for the speed of the bees. Several stung my ankles—which promptly swelled up to where I could hardly walk, much less run.

When the Israelites began their conquest of the land God promised them, there was still much work to do. God instructed them to conquer and destroy the pagan inhabitants, removing all traces of their wicked lifestyles and idolatrous rituals. In addition to this battle plan, God also promised to send His relentless hornets after those who hid themselves.

In walking toward Christian victory, my responsibility involves engaging in spiritual warfare, resisting the devil and his evil forces, claiming triumph through the abundant life Christ gives, and pursuing God’s supernatural transformation in my life. Though all these efforts are part of the known battle plan, I still need God’s invisible and powerful “angry hornets” to pursue the hidden enemies lurking in the unknown, shadowy places of my heart, soul, mind, and physical desires.

These are the enemies of which I may not be aware—but God is. They are the weights and sins that so easily ensnare me (Hebrews 12:1). They are the unseen adversaries against which I must pray, “Search me, O God, and know my heart; try me, and know my anxieties; and see if there is any wicked way in me, and lead me in the way everlasting” (Psalm 139:23-24). They are the strongholds that only leave as a result of God’s stinging attack.

The journey toward spiritual transformation involves me actively addressing what I know and trusting God to aggressively swarm what I do not. The more I empower the Holy Spirit, the greater the work of His angry bees. Let ‘em swarm!