Throwing Stones or Reading the Ground? 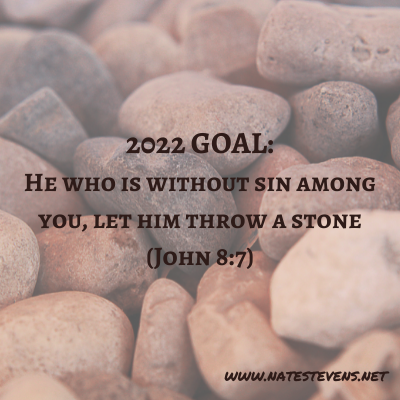 Then the scribes and Pharisees brought to Him a woman caught in adultery. And when they had set her in the midst, they said to Him, “Teacher, this woman was caught in adultery, in the very act. Now Moses, in the law, commanded us that such should be stoned. But what do You say?” This they said, testing Him, that they might have something of which to accuse Him. But Jesus stooped down and wrote on the ground with His finger, as though He did not hear. [John 8:3-6]

In the story of the woman taken in adultery, the religious crowd brought her to Jesus to trap Him. If Jesus disagreed with them, in the spirit of grace, He would contradict the Mosaic law and lose the support of the people. If He agreed with them, in the spirit of the law, He would be assuming power reserved only for the Romans and they could report Him to Pilate. But Jesus saw through their trap and stooped to write on the ground. As they continued pressuring Him, He replied with the incredible response, “He who is without sin among you, let him throw a stone at her first” [John 8:7].

In the story, we find the religious mob eventually retreated. Their legalistic desire for a “righteous execution” quickly faded in the presence of Christ’s holiness and omniscience. The conviction of His statement pierced their hearts. It would be highly interesting to know what He wrote. Quite possibly, it was a list of sins by name and their consciences pricked them into leaving His presence.

In spite of this story and the wisdom behind it, stone-throwers and ground-readers still exist today.

Stone-throwers are usually characterized as judgmental, legalistic, unloving, busybody gossipers. They generally allow their passions and falsehood to rule their lives. Instead of sticking to factual evidence, they latch onto to any juicy gossip (or erroneous social media posts). Quick to find fault in others, they ignore or excuse the sin in their own lives. Their norm is to quickly grab handfuls of stones, fling them at those they deem guilty, and pull others down—all in the self-righteous hopes of making themselves look or feel better. However, they seemingly overlook the fact that the opposite is true. Stones are not Christlike nor are they part of the Christian walk.

Ground-readers take the time to read, “It is written.” As the Living Word of God [John 1:1-3, 14], Jesus became flesh and dwelt among us. In reading the holy Word of God, applying it to their lives, and becoming more Christlike [Romans 8:29], ground-readers absorb what God has written. They don’t jump to conclusions but pursue factual evidence and the truth. Most often, they are more gracious and forgiving with someone “overtaken in a fault” [Galatians 6:1]. Understanding we are all prone to sin, ground-readers personalize Scriptural instruction to remove the plank from their own eye instead of judging someone else’s speck of dust [Matthew 7:1-5]. Introspection, not finger-pointing, is often where they start when discovering Scriptural truth.

I was a stone-thrower for many years until, by God’s grace and mercy, He removed that sinful habit. I still stumble but am more focused on being a ground-reader than worrying about what others may or may not be doing wrong. God’s Word needs no defense. There is no vacancy in the job of Holy Spirit. Jesus doesn’t call us to worry about others. He simply issues the invitation, “Follow Me” [John 21:19-22]. The goal of genuine Christ-followers is to “be doers of the word and not hearers only” [James 1:22]. It’s hard to turn the pages of God’s Word with my hands full of stones.

As we focus on the new year ahead, may we leave the stones to the archaeologists and focus our undivided attention on God’s written Word. Let’s stop looking for fault in others, pointing judgmental fingers, and start allowing God’s transforming work in us [2 Corinthians 3:18] until Christ is formed in us [Galatians 4:19]. May our life pursuit echo the Psalmist’s prayer: “I shall be satisfied when I awake in Your likeness” [Psalm 17:15].