Until There is No Other…But Jesus 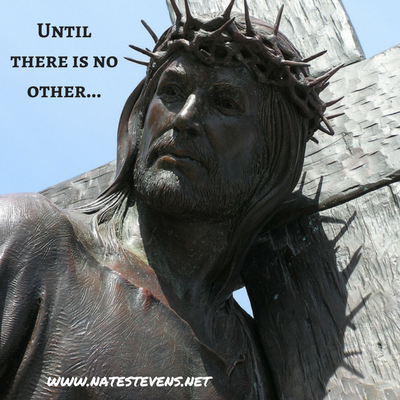 Until there is no other answer, solution, or focus but Jesus, this world will continue its chaos and turmoil.

There has been much talk recently about patriotism / globalism, personal rights, and injustice. People protest one thing after another as each person or group pursues personal interests, past hurts, perceived injustices, or even viable grievances. While the lost world slings its immoral rhetoric and news feeds regurgitate fake stories or inflammatory views, sadly, even Christians wade into the quagmire in an attempt to dignify or spiritualize the dialogue.

And yet, as a Christian, I must frequently remind myself this world is not my home. I am just a pilgrim passing through on my way to an eternal city whose Maker and Builder is God (Hebrews 11:10). With each passing day, my heart echoes the finale of John’s vision, “Even so, come, Lord Jesus!” (Revelation 22:20).

I’m not naïve nor do I turn a blind eye to what is happening on the national and global scenes. I don’t advocate status quo nor am I downplaying any group’s plight or right to freely exercise their individual quest for life, liberty, and the pursuit of happiness. No, my heart breaks over the blind-heartedness of Christians who should know better than to follow the world’s lead. sadly, they get twisted sideways by this temporary world’s issues instead of fixing their eyes firmly on Jesus, the Author and Finisher of our faith (Hebrews 12:2).

We quickly forget we have an unfair, highly resolute, common enemy. His sole objective is to deceive as many souls as possible until he claims them as his own. As Christians, Peter warns, “Be vigilant; because your adversary the devil walks about like a roaring lion, seeking whom he may devour” (1 Peter 5:8). Unfortunately, that sneaky snake does not have to come out in full attack mode. He merely has to touch a vulnerable pain point with one of his infected talons. He whispers a past hurt, an infringed right, a racial or gender divide. Like enraged pit bulls, Christians jump into that fight—often pitting brother against brother.

Want to talk about oppressive government? America doesn’t come close to the Roman Empire’s tyranny and brutality. People were taxed into poverty and viciously murdered for religious beliefs. Once captured, they were impaled with stakes, doused with oil, and lit as torches for feasts. Yet Jesus never once protested, led a revolt, or suggested overthrowing the ruling body. However, He did say if someone took my coat to give him my cloak also. If someone strikes me on one cheek, I am to offer up the other as well. This is a difficult concept for a lost, sinful world to grasp. Yet, as followers of Christ, it is our duty—yes, even our high calling—to live to His standard and example.

I don’t want to talk about the NFL, or discuss nuclear threats from rogue nations, or debate universal healthcare. Nor do I wish to defend corrupt governmental figures, or argue about social injustice, disenfranchisement, and political grievances. Instead of ranting incessantly about those topics, I would love to talk about Jesus.

Jesus did not try to solve this world’s problems because He knew this present world will soon pass away (1 John 2:17). He simply, humbly, and lovingly changed people one heart at a time—and still does today. Oh, that we who are called by His name would stop being distracted by this world’s rumblings and focus on the urgency of humbling ourselves, praying and seeking His face, and turning from our wicked ways. Only then will He hear from heaven, forgive our sin, and heal our land (2 Chronicles 7:14).

Until and unless Christians “lift up your eyes” and “fix your eyes on Jesus,” we solve nothing. While we wrestle powerlessly in the physical realm, our light is darkened, our salt flavorless. We must wake up to the realization that our struggle is not in the physical realm but against the powers of this dark world and against the spiritual forces of evil in the heavenly realms (Ephesians 6:12).

Until There is No Other

Until there is no other answer or solution but Jesus, we sleepily buy into Satan’s distracting schemes, intensify the angry discussion, and further splinter the impacted groups—all while lost, parched, hurting souls plunge into the eternal abyss.

May the words of Charles Weigle’s song (1932) resonate in your heart and challenge you to accept it as your spiritual battle cry today:

I would love to tell you what I think of Jesus,
Since I found in Him a friend so strong and true.
I would tell you how He changed my life completely;
He did something no other friend could do.

No one ever cared for me like Jesus;
There’s no other friend so kind as He.
No one else could take the sin and darkness from me;
O how much He cared for me.