Uproot the Seedlings of Sin Before They Become Trees 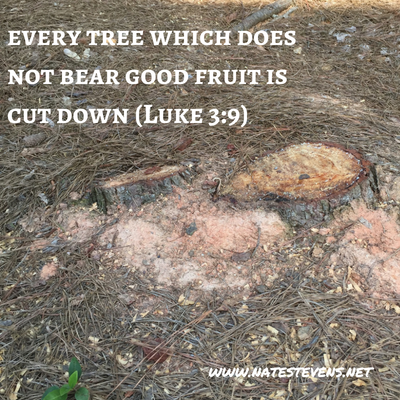 Do not be deceived, God is not mocked; for whatever a man sows, that he will also reap. (Galatians 6:7)

I’m a tree lover. With every home in which I’ve lived as an adult, I have planted trees, shrubs, and bushes of some kind.

With my current home, I watched two small pine trees grow from seedlings from the forested area behind my backyard. However, they sprouted in an area twenty feet from the house.

Initially, I thought they were cute—two small seedlings braving the elements, standing out alone—so I let them be. As years passed, I admired their beauty as they cradled snow on their branches, waved defiantly at passing windstorms, and continued their upward spurt. After all, they were mine.

They grew straight and tall on their own. I did nothing to help or hinder them. They simply did what pine trees do. Seeds became embedded, put down roots, and grew in their environment. I did nothing but leave them be and watch them grow.

Now well over 20 feet tall with trunk diameters approximating ten inches, they were sturdy trees—that now threatened my home. The soil’s incline enabled them to quickly sprout yet did not afford the depth necessary for sturdy roots. Their height now came within reach of the house if a storm toppled them. So, in the interest and safety of my home, I cut them down. But the job was much larger and took much longer than if I would have simply uprooted them as seedlings.

As I cut them down, lopped off the branches, and buzzed the trunk into two-foot sections, it hit me how sin is very much like those two pine trees. Sin always finds fertile ground in any unprotected area of life. I can choose to toy with the sinful pleasures I excuse, justify, or tolerate—allowing them to become deeper rooted over time. But soon enough, sin eventually threatens to destroy anything precious or valuable like family, reputation, career, or testimony.

Just as I initially admired those cute and adorable seedlings, sin initially feels appealing and harmless. A seemingly innocent fantasy, extra-marital flirting, curse word, gossip, or any other sinful behavior not immediately repented of and forsaken will grow in influence and impact. What is tolerated is perpetuated—and eventually encroaches and threatens.

Uproot the seedlings of sin before they threaten and destroy your life.