“Wait Until Your Father Gets Home!” (Translation – Judgment Awaits!) 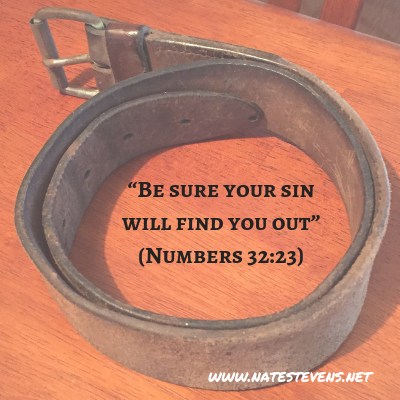 “Just wait until your father gets home!”

I heard those words so often as a child it is little wonder I didn’t develop a strange fear of my dad. My mom used to hurl those terrifying words in the height of her frustration with raising and disciplining five children. Of course, she often “corrected” us with her wooden spoon or washed our mouths with soap when a euphemism (darn, heck, golly, gosh, gee-whiz) escaped our lips. But when she became exasperated, she threatened with dad’s return. Everyone involved knew what that meant—a close encounter with dad and his leather razor strap.

Oh, I became quite familiar with that strap and its associated proceedings. And yet, mom and dad disciplined us only for those trespasses they knew about or found out. As I am sure they suspected, there were many other unknown indiscretions. But God knew about them.

Just because God is invisible does not mean He is absent. As omnipresent, He is everywhere simultaneously and sees everything immediately. His inescapable law of sowing and reaping confirms, “Do not be deceived, God is not mocked; for whatever a man sows, that he will also reap” (Galatians 6:7).

In my high school years, I attended a Christian school that administered paddling when rules were broken. I recall only getting paddled once. Just before my punishment, I again pleaded my innocence for this specific offense. My high school principal very softly said, “Then let’s count this one for all those times I didn’t catch you.” Very wise man.

Whether God’s judgment immediately follows or whether it comes in the hereafter, we can rest assured it is inevitable (Hebrews 9:27). Moses cautioned, “Be sure your sin will find you out” (Numbers 32:23). No other person may ever find out about our hidden sins. But God knows. In His omniscience, He knows all. His sovereign orchestration either coordinates judgment here on earth or when we stand before Him as “each of us shall give account of himself to God” (Romans 14:12). With His exacting, precise justice, eventually God administers righteous judgment.

Fortunately, God also sees all the goodness and virtuous things we do. Some are readily apparent, such as volunteering at a homeless shelter or building homes for Habitat for Humanity, while many other acts of kindness go unseen and unnoticed by human eyes. Even then, Jesus reassured us that God will openly reward any charitable deeds done in secret (Matthew 6:4).

Our Father is Returning Soon

One day our Heavenly Father will return to transport us to His heavenly home. Just as my father’s return frightened me when I had done something wrong, that day should frighten those with unconfessed or unrepentant sin in their lives. But on those days when I awaited no punishment, my father’s return was a joyous occasion. Those who are living before God, walking in the Light of His Word and fulfilling whatever task He assigns, may rest assured of His favor.

If that day frightens or worries you, I encourage you to confess and turn from whatever known or hidden sins in which you are engaging. God loves you, offers to forgive you, and longs for an intimate relationship with you. Please turn to Him today.

For those who are excited with the Heavenly Father’s imminent return, may we earnestly be about the tasks He has given us. May our daily prayer be, “Even so, come, Lord Jesus!”