What Do We Know About The Resurrection of Jesus? 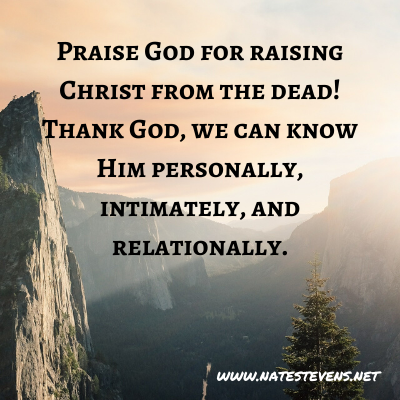 “Why do you seek the living among the dead? He is not here, but is risen!” When they did not find His body, they came saying that they had also seen a vision of angels who said He was alive. And certain of those who were with us went to the tomb and found it just as the women had said; but Him they did not see. [Luke 24:6, 23-24, bold text added for emphasis]

What do we truly know about the resurrection of Jesus?

There is a vast difference between an intellectual understanding of the religious account and a personal relationship with Jesus Christ. A person may know all there is to know about the death, burial and resurrection of Jesus and still not know Him personally.

Two Greek words for knowing something explain the difference (explained in an article titled What Do You Know). We derive eido knowledge by way of our senses, what we perceive or observe, or what we discern (e.g., facts and figures). Ginosko, however, refers to knowledge that comes from intimate and personal acquaintance (e.g., intimacy between a man and wife). Eido is factual and intellectual; ginosko is relational and experiential. Eido is head knowledge; ginosko is heart knowledge. I may eido know Jesus (know about Him) or I may ginosko know Jesus (know Him personally and relationally).

To explain further, lets look at the events surrounding the resurrection of Jesus. Several groups of people saw the evidence. Only a few saw the risen Savior.

First, there is the factual evidence. Even the Sanhedrin, Roman solders, King Herod and Pontius Pilate knew this. They heard the stories about the open tomb and the missing corpse. We know this because they fabricated a “fake news” story alleging the disciples stole the body to propagate their “new faith.”

Many people acknowledge the empty tomb. They know the “religious” language of Scripture and the historical account of Jesus. Some even have memorized Scripture and know most church hymns and choruses by heart.

But, just as the early-morning women who came to the tomb to anoint Jesus’ body for a proper burial [Luke 24:1-6], they approach the resurrection event from their experience and expectations. The women knew He was crucified, had died, and was buried there. Human logic and traditional routine prompted their actions. They came to the tomb, but never encountered Jesus. Though loyal to the crucified Jesus, they lacked faith in the resurrected Jesus.

This group represents those with a mental recognition of who Jesus is. They profess to be Christians, yet have never personally encountered the living Christ. Some may have been raised in Christian homes, even be members of churches. However, to this group Jesus says, “I never knew (ginosko) you” [Matthew 7:23].

Secondly, there is the personal, intimate, experiential relationship of those who acknowledge the Risen Savior. Just as the disciples in the Upper Room who eventually spent time with the resurrected Jesus, they have personally encountered Him. They have been “born from above” [John 3:3] and are indwelt by the Holy Spirit [2 Timothy 1:14]. On a daily basis, they encounter the risen Savior.

This group represents those with a new, regenerated spiritual reality. Along with professing to be Christians, they possess this newfound faith in Christ. Their changed spiritual perspective reveals this transformation. With grateful, believing hearts, they approach Him, not to anoint a corpse, but to worship and serve their risen Lord.

Their ginosko mindset is due to a personal, intimate, life-changing relationship with Jesus Christ, the resurrected, ascended, glorified Son of God. To this group Jesus says, “Well done, good and faithful servant. Enter into the joy of your Lord” [Matthew 25:21,23].

In one of His parables, Jesus confirmed there is a “great gulf fixed” between these two realities [Luke 16:26]. Regardless of some religious teachings, no traffic moves between the two eternal destinations. Death is the final seal of eternal destinies.

To grasp the impressiveness of this reality, let’s look at the meaning of the words Luke used in capturing this parable. The word great means exceedingly vast and impassable. Gulf implies a yawning and impassable chasm. The word fixed verifies that the chasm is resolutely and eternally in place.

Luke, the author of the book that bears his name, was a physician. In his medical terms, the word he used for gulf is chasma which means “an open wound.”** Between lost mankind and holy God is an open, festering wound. The only remedy for that wound are the nail prints and riven side of Jesus, representing His shed blood on Calvary.

When God sees those wounds, and realizes a lost person has accepted and appropriated Christ’s sacrificial death, He closes the gap and accepts the lost person through salvation by grace through faith [Ephesians 2:8]. Only Christ’s blood cancels God’s wrath and invokes His grace.

Jesus is the only way; salvation is the only method; sanctification is the only process. Only by establishing a personal relationship with Jesus, being spiritually regenerated and the Holy Spirit taking up residence inside, does anyone truly know the risen Savior and Lord, Jesus Christ. Only in this manner, do we cross over the “great gulf fixed” from hell to heaven.

This is truly the meaning of the Resurrection. Without it, there is no life after death, no hope, no faith worth following. Praise God for raising Christ from the dead! Thank God, we can know Him personally, intimately, and relationally. If this is not your present reality, I pray you would make it so today.