When God Closes In 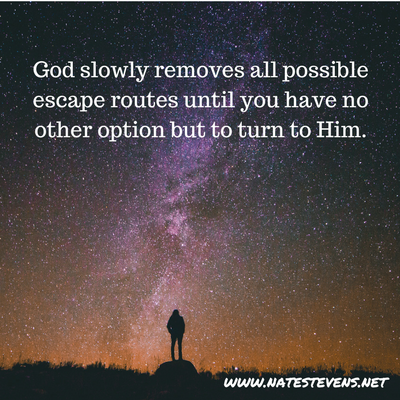 Have you ever experienced a time in your life when, no matter what you tried, things just never seemed to get better? If you were Elijah, your brook dried up. As Jonah, the fish was gaining on you. If you were Paul, your horse bucked you off. You get picture. The lemons of life far outpace your ability to make lemonade. Seemingly, God closes every door you encounter.

From a random chance perspective, these events wouldn’t make sense. But since there is a sovereign God who orchestrates all things according to His purpose, we have to believe He moves among the endeavors of man. Sometimes He even directly opposes what we try to accomplish.

I recently read the story of Balaam in the Old Testament. You know, the one about the talking donkey? Of course we remember that part of the story because it intrigues us. But there is more to it than just a talking burro. Read through it again and see what else comes to mind.

Balaam got up in the morning, saddled his donkey and went with the Moabite officials. But God was very angry when he went, and the angel of the Lord stood in the road to oppose him. Balaam was riding on his donkey… When the donkey saw the angel of the Lord standing in the road with a drawn sword in his hand, it turned off the road into a field. Balaam beat it to get it back on the road.

Then the Lord opened the donkey’s mouth, and it said to Balaam, “What have I done to you to make you beat me these three times?” Balaam answered the donkey, “You have made a fool of me! If only I had a sword in my hand, I would kill you right now.”

How God Closes in on Us

God enabling the donkey to talk showed Balaam how close he had come to death. Balaam had his agenda – he was going with Balak’s men to fulfill Balak’s desire to curse the large group of Israelites who were “invading” his land. When Balaam checked with God, He initially told Balaam not to go with them. But Balaam wouldn’t take “No” for an answer so he continued until God finally gave him the green light. But God prevented him from cursing Israel.

Isn’t that just like us? When God answers with a “No,” we continue asking Him the exact same thing. So there are times when, instead of protecting us from things He knows will harm us, God lets us “touch the hot stove” so we learn to trust His answer. Such was the case with Balaam. God allowed him to pursue his desired course of action so He could teach a valuable lesson.

God first resisted Balaam in a wide area where there were plenty of options to circumvent His will. Later, He opposed him in a narrow area with only the ability to squeeze by. Finally, He withstood him in a tight place where there was no other option but to heed His call.

Why God Closes in on Us

That’s what our loving Father does. He asks His children to trust His plan, to listen to His word, to wait on Him. Sure, He grants us the freedom to go our own ways; then He slowly but surely closes in.

He doesn’t leave us where we want to go. He knows the path we should take. He has already seen our life journeys from before the creation of the world. He already knows the purposes for which He created each of us. So He resists us to transform us. Methodically. Intentionally. Sovereignly.

See, He loves you and wants the best for you. So He closes in around you. He slowly removes all the possible escape routes until you have no other option but to turn to Him. Although this may initially seem mean and painful, you might consider thanking Him for protecting you – even from yourself.

Father God, thank You for Your sovereign enclosure. Thank You for loving me enough to remove from me the people and things that harm me and distract me from Your purpose for my life. Help me to listen and obey as You interact in my life. When I choose poorly, please close in on me. Please oppose me until my heart’s desire is “Thy will be done.” Help me to trust Your leading, to become the person You created me to be and to fulfill the purpose You have for me. In Jesus name I pray, Amen.