Whose Image Do I Bear? 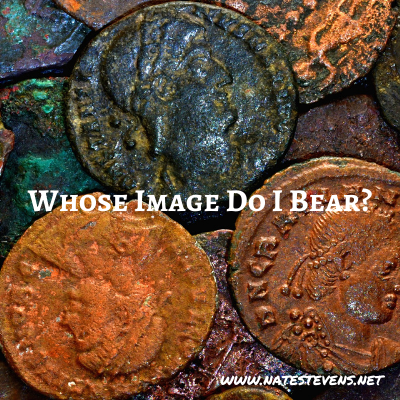 In the 90’s, a popular camera commercial stated, “Image is everything.” I somehow suspect they probably didn’t know just how Scriptural they were!

The term “image” in Scripture means a likeness, representation, or resemblance. When asked if it was lawful to pay taxes to Caesar, Jesus referred to the person reflected on a coin and asked whose it was. Responding to the reply of “Caesar,” He gave the classic response: “Render therefore to Caesar the things that are Caesar’s, and to God the things that are God’s” [Matthew 22:20-21]. Although more prevalent in times past, coins today also bear reflections of past rulers.

In Genesis 1:26, God said, “Let Us make man in Our image, according to Our likeness.” Here again, the Hebrew word means resemblance or a representative figure. Even Jesus, the second person in the Godhead, took on the form (likeness) of man and became God with us [Matthew 1:23].

Being made in God’s image means God made man as He intended man to be. Eternal. Perfect. Filled with God’s Spirit. Living in constant contact and conversation with God. That is how God created us. It is also how His authentic children will be in His future kingdom.

Of all creation, He spoke everything into being. But He handmade us. He formed and molded us to resemble Him. How cool is that!

Unfortunately, Adam sinned when he chose to disobey God. From that act, sin distorted us It changed us into something we were never designed to be. God made us eternal. Sin makes us physically mortal. From creation, God made us perfect. Yet sin now reigns in us. He designed us for constant communion with Him. Yet, as a result of sin, He removed His Spirit from us.

Jesus further explained the impact that sin has on His intended likeness for us. In Luke 15:8-10, He described a lost coin. The coin fell from the money pouch or box where it was kept safe. Bouncing on the earthen floor, it rolled into some obscure corner. Dirt, cobwebs, and dust defiled the king’s image on it. Actually, the coin was unaware of its lost condition.

Just like that coin, sin marred God’s initial design for us. Without His Word, we would never be aware of our lost, marred state. Furthermore, without His rescue, our image would remain hopelessly distorted.

But there is hope! Jesus came to redeem and reconcile us back to Himself. His sacrificial death on Calvary enables our initial image to be restored. Through Christ, we can regain what has been lost to sin. He is the Redeemer, the ultimate Restorer.

Through His salvation, we “put off the old man with his deeds, and have put on the new man who is renewed in knowledge according to the image of Him who created him” [Colossians 3:9-10, bold text added for emphasis]. In other words, our distorted image can be restored to the manufacturer’s settings!

Just how do we do that? So glad you asked!

When a person accepts Jesus Christ as personal Lord and Savior, he claims His sacrificial death for sin. He appropriates Christ’s death as his substitute. God’s Word confirms, “If anyone is in Christ, he is a new creation; old things have passed away; behold, all things have become new” [2 Corinthians 5:17].

With this restoration, God supernaturally rebirths, reshapes, and remolds. He re-fashions us into “the image of His Son” [Romans 8:29, bold text added for emphasis]. Additionally, He removes sin’s filth so His resemblance can shine through once again. The more we submit to Him, the more He transforms us “until Christ is formed” in us [Galatians 4:19].

God made us in His image. Sin distorted us. But by God’s grace, we can be redeemed, restored, and transformed. We can be remodeled into His intended image. Each day, we face opportunities to become more Christlike.

What does Christlikeness look like? Is it something we can attain here on earth? Or is it the final stage once we reach Heaven?

Paul says, “But we all, with unveiled face, beholding as in a mirror the glory of the Lord, are being transformed into the same image from glory to glory, just as by the Spirit of the Lord” [2 Corinthians 3:18, bold text added for emphasis]. The transformation begins here on earth. Each day, we can submit to what He reveals in His Word or though His Spirit. As we obey His leading, the transformation continues. Our goal should be to so resemble Christ that we won’t experience a drastic change when we reach Heaven’s shore. Oh, glorious day! To be with Him and be like Him!

May God’s Word fill our minds and guide our hearts. With His Spirit living within us, may we slowly but surely allow His transformation and reflect our King’s image. Jesus said, “And I, if I am lifted up…will draw all people to Myself” [John 12:32]. May my life lift Him up and may my image bear evidence of my resemblance to Him.

Image IS everything! Eternal destinations and rewards depend on it!