Why Does Divine Healing Seem Elusive? 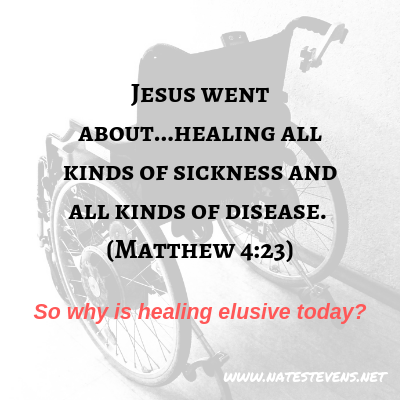 The four injections to my spine almost made me swear (no worries, I didn’t). I informed the doctor he was off my Christmas list.

Over six months ago, I started feeling sharp pains in my lower back, throbbing / tingling down one leg, and numbness in the other. It felt like someone was tearing my leg from my body. I then progressed to having pain while sitting, standing and laying down. Sleeping through the night became a distant memory. On the advice of my chiropractor, I agreed to an MRI. It revealed two herniated discs impinging the nerves down my legs.

Rounds of Prednisone – check. Pain medication – check.  “Dry needling” – don’t ask, but check. Daily sessions on an inversion table, spinal epidurals, and nerve blocks – check, check, check. The next step is a visit to a neurosurgeon. All along, I’ve asked God to supernaturally touch the injured area. I believe He can effortlessly move everything back into place. Still, the pain remains.

So, why does divine healing seem so elusive? If a person has faith that God can do it, and asks for it in Jesus’ name, what prevents healing from occurring? It must involve more than just asking, believing, and receiving.

Healing in the Scriptures

I try to keep things as simple as possible, all while knowing there are some things God doesn’t intend for us to understand. God says, “My thoughts are not your thoughts, nor are your ways My ways,” says the Lord. For as the heavens are higher than the earth, so are My ways higher than your ways, and My thoughts than your thoughts” (Isaiah 55:8-9). The healing performed in the Bible confirms that only a few get healed.

So, some people of great faith received healing while others did not—even though they fervently asked God for it. Yes, God can and does heal. But it appears He does so when it is according to His omniscient purpose, His timing, and His sovereign will.

No Physical Healing for my Dad

I have long questioned why healing seems random, often wondering why my dad was crippled for most of his life. He walked with a severe limp while serving as a missionary for thirty-nine years before his death. As a child, he was involved in an accident after which he clinically died in the Emergency Room. Yes, he saw the glorious hereafter and recounted some incredible experiences. His dad (my grandpa) fervently pleaded with God to bring him back to this life, which He did. But my dad’s body was severely injured. He walked with a limp and experienced terrible pain for the rest of his time on earth. And yet, he was one of the Godliest men I know.

I’ve come to trust God’s sovereign orchestration of every detail of life. God doesn’t cause bad things to happen (remember Joseph, Esther, Job, and many others). He sovereignly coordinates every detail to transform people, events, and futures. In my dad’s case, his crippling accident, clinical death, and after-life experience gave him an insatiable, lifelong taste for heaven. So, the very adverse situation we might question became his inspiration for faithful service and heavenly longing.

Does that mean God allows pain and sickness for the duration He chooses? I’m not sure if “allows” should be the operative word. Sickness, illness, even death are all the result of man’s fall into sin. They were never part of God’s perfect plan. However, He constrains Himself from stepping in to heal every ailment due to His eternal love and the free will He grants us. If He overrode our freewill even once, it would cease to be free. We would then be mere robots responding, not out of free will and love, but out of fear or obligation to gain His favor.

Is it Due to a Lack of Faith?

I’ve seen God heal some people miraculously and I’ve also witnessed Him withholding His hand of healing. To say healing was dependent on each person’s level of faith, would be a form of works-based belief. And Scripture clearly tells us our faith is “not of works, lest anyone should boast” (Ephesians 2:8-9). My faith doesn’t obligate God whatsoever.

Granted, freewill choice may result in addictions, diseases, and other self-inflicted physical ailments. But God is not obligated, no matter my level of faith or even my amount of prayer, to override my previous poor choices. If I choose to smoke, become addicted to nicotine, and end up with lung cancer, He is under no obligation to heal me—regardless of my faith or even repentance.

Is it Due to a Lack of Fervent Prayer?

If, in His sovereign perspective, He foresees an event that glorifies Him as a result of healing, He may grant the healing. I’ve also stood by the Intensive Care Unit bedside of a college friend who battled cancer since she was two years old. She was an ardent follower of Christ, a tremendous witness who led countless people to Christ. Two weeks before she finally passed into eternity, she actually died clinically. After the hospital staff revived her, she whispered, “It’s beautiful, it’s beautiful.”

Please understand, there were more than “two or three gathered together in His name” fervently praying for her recovery and healing. Though we had mountains of faith, still God chose to take her. As one of her pallbearers, I had a front row view of how God used her testimony, illness, and funeral to draw fourteen souls to Himself. One of which was her alcoholic father. During her life, she witnessed to him every day to no avail. Yet, through her sickness and death, God received the glory and added souls to His kingdom.

I don’t claim to have all the answers. I’ve seen the righteous healed and not healed. Even if everyone would be supernaturally healed, the fact remains we will all eventually die. Placing such a spiritual emphasis on earthly healing tends to distract from the blessed hope of eternal wholeness in God’s presence.

When I assemble the pieces of what I know from studying Scripture, the result is an amazing picture of a loving God’s sovereign hand, moving according to His will to draw us to Himself, transform us into His likeness, and glorify His name through us. Quite often, pain and suffering strengthen us and draw us closer to His heart (more information in Deck Time with Jesus). For those occasions when He does heal, we should be grateful. Yet, when He doesn’t, may we say as the Apostle Paul, “When I am weak, then I am strong” (2 Corinthians 12:10). Suffering is bearable when we’re wrapped in God’s grace and reliant on His sovereignty. In every situation and circumstance, He receives the glory and works all things according to His purpose (Romans 8:28).

Should God divinely heal my back and legs, I will be grateful and glorify Him. If He doesn’t, I trust He will guide the neurosurgeon’s hand to fix what is broken. Yet, even if He heals me through whatever method He chooses, I still realize this earthly body will eventually return to the dust from whence it came. But then, praise God, everlasting healing will take place because “we shall be changed…this mortal must put on immortality” (1 Corinthians 15:52-53).

Until He heals or returns, I keep praying for His healing, transforming touch.